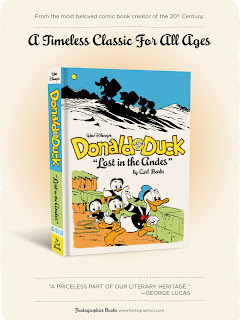 I, along with many others in the blogosphere, have been enthusing over Fantagraphics newest Disney project. This is to reprint all the Gottfredson Mickey Mouse strips and if that was not enough cause for celebration then the second prong in their intent to share the best Disney comics with as wide an audience as possible their plan to publish all of Carl Barks legendary Duck comics. Starting this autumn/ winter with a collection from the peak of Bark's creative output with stories from the 1948-49 era including such classics as Lost in the Andes and Race to the South Seas. The latter story was hellishly rare as it had only been available as a March of Comics giveaway and until the stories were reprinted firstly by Russ Cochran and Bruce Hamilton and then later by Gladstone, this story used to command premium prices amongst collectors anxious to see one of the pivotal moments in the Gladstone, Donald relationship. 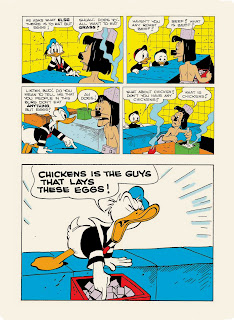 The story was also mega rare because at the time Western publishing had no desire to reprint the thing as some of the islanders depicted seemed to fall into the racial stereotyping quagmire and it wasn't until Oberon in Holland decided in the late 1970's to reprint ALL the Barks classic stories that this tale was dusted off and represented with the aid of genius draftsman Daan Jippes tracing some very shoddy photostats of the original comic.

So in the late 70's and throughout the 80's if you wanted stories like this one or Voodoo Hoodoo which is also appearing in this volume of the Fantagraphics collection you had to teach yourself Dutch and invest in a pile of Dutch Ducks.

So thank goodness for Fantagraphics as for the first time we are going to get the whole series of these stories in affordable format and with a very sympathetic coloring job provided by Rich Tommaso. Fantagraphics have provided a downloadable PDF of the new baby which you can access here. 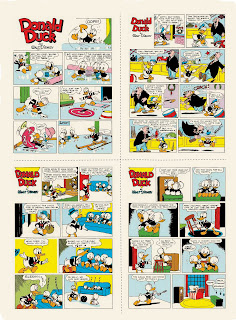 My only slight (well perhaps more than slight) beef is with the cover image. Their original promo showed a cover which was to all intents and purposes a straight lift (bar lettering and recoloring) of Barks original classic cover design. This might seem lazy and non creative, but it was actually the way to go, designers are functionaries on jobs like this. They are acting as MC's to the main performance and as such they should cleave to the principle that less is more and not try and grab the spotlight themselves by attempting to be too clever and assembling elements of the artist's creation in ways which they were not intended to work. This is precisely what has happened with the new cover design, which falls into  the same trap as the earlier Gladstone series by cobbling together portions of Barks' story panels to try and create a new cover image - this just doesn't work. The beauty of using artwork which was designed to fulfill the function of a cover is that it's already designed to do the job you request of it. And it conforms to that most important design principle; 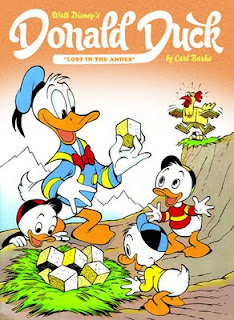 That being said I will say that designer Jacob Covey has done a sterling job in constructing a Barksian feel to all the elements he has assembled and the letter forms look really lovely, neatly complimented by the clean and unfussy color scheme. It's also worth pointing out that Fantagraphics will be including all of Bark's covers, which again gives this collection the edge over it's Gladstone predecessor in terms of completeness. 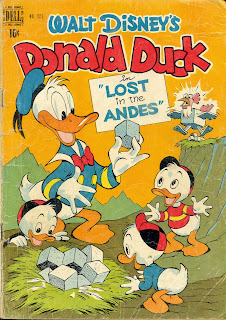 My only other slight concern at the moment is the interpretation of the simpler palette which typified Western printings treatment of these stories when they first appeared. Light yellow was one of the main colors employed. It added brightness without getting too citric. Full on 100% yellow was used on much smaller areas. In the sample posted on their PDF RichTommaso seems to have drifted into using the full on sherbert hued yellow rather than the more laid back yellow which is required. Hopefully this is just a minor aberration. The rest of the pages look lovely and again as with Prince Valiant (and Book Palace Books Wulf the Briton) they appear to be using that lovely off white matte archival paper to help present the pages in as sympathetic a way as possible.

In the meantime check out Rich Tommaso's Web of Comics - excellent reading (and viewing!). 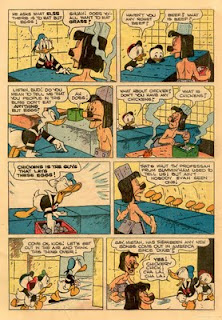 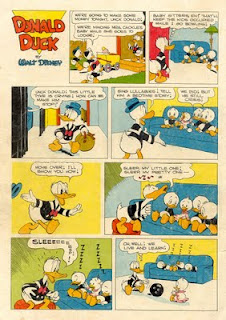 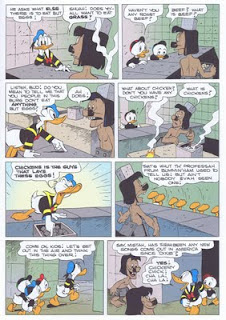 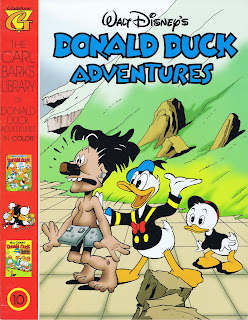 Here for your edification is a comparison with the Fantagraphics pages first, followed by the pages from the original Western comic followed lastly by  Gladstone's treatment.
Posted by Peter Richardson at 09:04