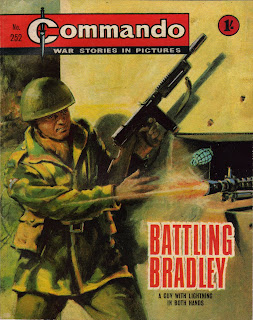 Calum Laird and the team at Commando HQ must be doing something right as there has been a surge in subscriptions for Britain's longest running war pocket library. Perhaps it's partially fueled by the imaginative and innovative initiatives such as their direct to iPad subscription service, complimented by their well designed user friendly website.

I'd like to think that it's also because they are reaching back further than they ever have done before for their reprints. As a consequence readers are now seeing some of the very best of the early Commandos and the current offerings are no exception to this rule with Cossack from 1970 with art by the recently departed Victor De La Fuente coupled with a cover by Jordi Penalva and Battling Bradley with some superb artwork by Cortes.

Here's the original comics in all their ancient glory followed by the handsome looking reprints. 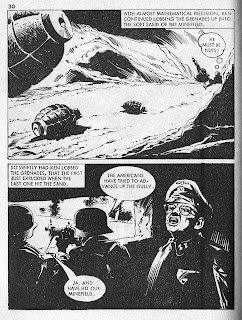 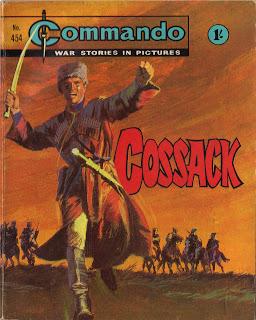 There is also the offer of a free copy of the latest Commando giant sized book, Rogue Raiders to all new subscribers - so go and check out their website now! 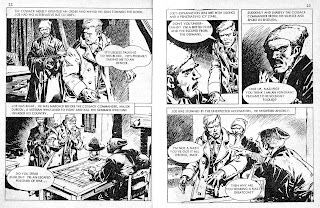 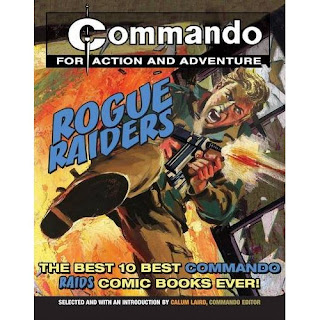 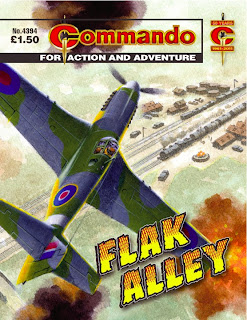 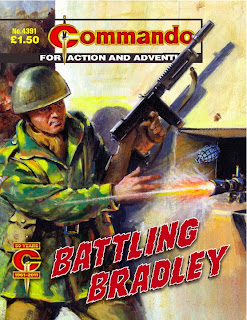 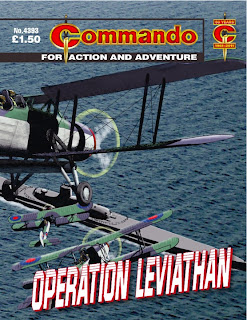 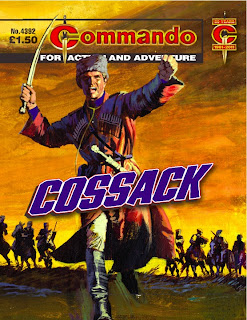 It didn’t matter very much what you gave Ken Bradley, boxer turned paratrooper, to fight with. His bare fists made him a match for a handful of Germans any day.
But give him a gun, especially a Tommy gun, and he’d take on anything that had a swastika painted on it. Even a tank…or a pill-box! What a man to have a your side.

A story packed with action centred round a man determined to settle a debt of honour is archetypal Commando fare, isn’t it? If it wasn’t for the sting in the tail this would be a good action story. The twist makes it a great one. One which has stuck in my mind for the years since 1967.
Cortes’ artwork has a darkness about it which lends depth to the story and the cover really sums up what the whole thing’s about. I like to think that Commando’s still about the story values you see here and that someone reading a new tale today will remember it for as long.

For centuries the Cossack horsemen rode to war over the mighty steppes, their sabres red with blood, their savage battle-cries chilling their enemies with fear. But their greatest battles came in the Second World War when they pitted horse and sabre against Nazi tanks and machine guns.
I was a hard, tough war, even for the Cossacks — so you can guess what it was like for an RAF air-gunner who escaped from a German prison camp and rode with them!

An RAF air gunner, just escaped from a German prison camp and riding with a distrustful band of sabre-wielding Cossack warriors, should be enough to get any keen Commando reader reaching for a copy.
A challenging cover from Penalva and inside artwork from the incomparable Victor de la Fuente will more than satisfy the most demanding of fans. Peter Newark wrote the script and he was a master at this type of story which was the sixth to go on sale in 1970.

When the German onslaught forced France to capitulate in 1940, Frenchmen were forced to choose between co-existing with the invaders by serving the Vichy government or fighting on with the Allies. When Allied ships bombarded the French fleet to prevent it falling into German hands, killing many French sailors in the process, French loyalties were further divided.
Which way would the crew of the mighty French submarine Leviathan — with her twin eight-inch guns and ability to disappear below the waves — go?

In 1943, Pilot Officer Chris Buckley completed his photo-reconnaissance course and was delighted to be out of a stuffy classroom. Finally he was at the controls of a P51 Mustang.
As expected, he soon found himself dodging flak in the skies above German-occupied Europe. What he didn’t expect was to be dodging even more flak from his CO ⎯ who was convinced that Chris wasn’t up to the job!