Work In Progress - The Wonders of Illustrator! Part 2 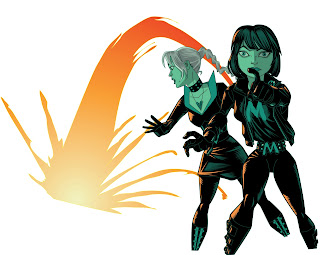 We're into the festivities with friends and family arriving, food being prepared, presents wrapped, Christmas Tree being erected and consequently routine is out the window.


So I thought I'd post an update on the image that I posted yesterday. Normally I would expect to complete an image like this in two days - three days mega-max, but with my fractured timetable that isn't possible. So making the most of this opportunity I thought I'd just do an update on where the illustration is going. 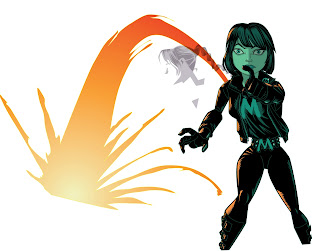 I'm hoping that I'm going to have the publisher on board with this. I did one upfront illustration (the one of the girl being hit by the fireball on yesterday's  post) to secure the job and let everyone see where we were going in terms of styling and content. The stories are wildly fanciful and aimed at slow readers aged 15-16 and centered around a team of teenage heroes who have no super powers but are cool and resourceful. Bearing in mind the market that these books are aimed at I pitched the idea of Goth Manga which the editorial team responded to with enthusiasm - so fingers crossed that they don't suddenly remember that they need to do a Saudi Arabian co-edition - because then I am totally effed.

So here are the team so far, the action to the left is a molten fireball, the rest of the image is reflecting (literally) the fact that they are looking at a green screen.

The second image shows one layer knocked out so you can see the shadow layer. Golden rule is keep the shadow shapes simple as there is already a lot for the eye to engage with.

The perspective on the foreground girl's hand is amplified by heightening the contrast between the colors on her outstretched arm and hand. Again just keeping it simple.
Posted by Peter Richardson at 18:08