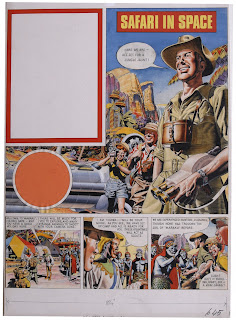 I must apologize for come over a bit tub thumperesque with yesterday's blog. There is a golden rule which needs to be adhered to as much in cyberspace as around the dinner table and that is conversation and ideas are always welcome, but please no sex, religion, or politics. Because that way leads to treading on other people's feelings and personal persuasions, but apropos of the media and the way we are constantly misled by journalists focusing more on their own career advancement inside huge corporations rather than the story they should be covering I felt a little food for thought might not be totally inappropriate.

Anyway apologies to those of you who thought otherwise. 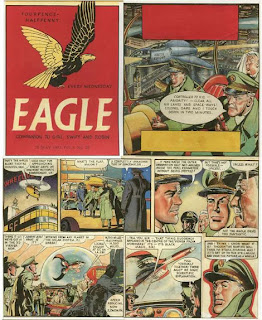 Now then on to ideas for post Christmas blow out reading as you lie there like a beached whale wondering what to do next. It has been my pleasure to read from cover to cover a truly stupendous book which appeared a couple or so weeks ago. Going under the title of "Tomorrow Revisited" this book by Alastair Crompton examines the events that in the aftermath of World War Two led the artist Frank Hampson and the clergyman The Reverend Marcus Morris to create what has long been regarded as one of Britain's finest comics, The Eagle and the character that inspired millions of readers to dream of space flight and a better and brighter tomorrow - one Colonel Dan Dare. 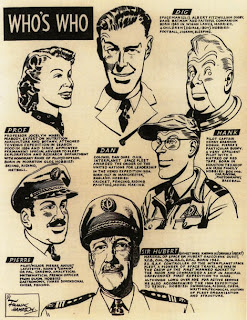 The book is essentially a rewrite of Crompton's earlier telling of this tale, "The Man Who Drew Tomorrow". This book published in 1985 very shortly after Frank Hampson's death was as Crompton himself puts it, very much a hagiography, albeit a truly compelling read. The problem with the earlier book is that Crompton who had assiduously courted Hampson as regards gaining his co-operation and involvement with the project received polite and then finally brutal rejection from his subject.

The reasons for this are what makes both books such engaging reads, the advantage that the second book enjoys, is that Crompton spent the intervening years between his first attempt to set the record straight assembling the necessary information. Information which reveals a lot more of the machinations that led to the destruction of all of Hampson's hopes and ambitions. Unlike his previous book, the account doesn't shy away from considering Hampson's own responsibility for laying the foundations for what was a truly ruthless severance of an artist from his creation. 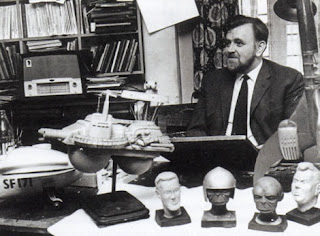 The other advantage that this book enjoys over it's predecessor is the lavish quantity of color images from Hampson's years as artist in chief of Dan Dare. In addition to the artwork and photos that so fulsomely flesh out Crompton's text, there are some truly fascinating cutaways by artist Graham Bleathman of both the old Bakehouse and Bayford Lodge Studios, which adds further insight to this fascinating story.

All in all a must have book!

Published by PS Publishing and available direct from them or via Amazon this beautifully designed book is just a mouse click away. 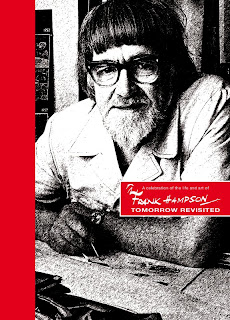