P.G., Wulf and The Exacting Science of Restoration 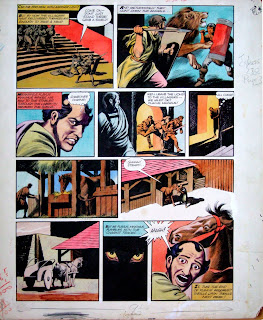 Paul Gravett is probably (sparing his blushes) one of  the most media savvy promoters of comics as an art form in the UK. I first came across his work when in 1985 I sent off for a trial copy of his "Escape" zine which with sundry talents such as Hunt Emerson and a very young Rian Hughes was like a breath of fresh air with a definite "bande desinee" vibe about it, which in my book couldn't be a bad thing. 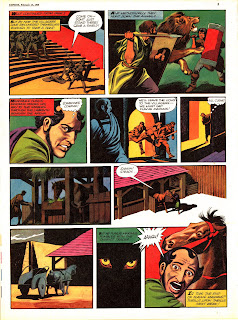 Anyway I've long been aware of Paul's works and his rise to something of celebrity status amongst comic critics and historians. He is a networker par excellence and if there's any kind of comics event either here in the U.K. or further afield, you can be sure that Paul will pop up amongst the assembled luminaries. But in addition to his networking talents Paul has got an uncanny ability to divine other comic enthusiasts interests and probably has more of an idea of what's in their collections then they have.

A few years ago I received an email from Paul apropos of a new book he was working on which was a history of British comics. He needed some material on Ron Embleton's "Wulf the Briton" and he had divined by either esp or superb journalistic detective work that I had a couple of Wulf originals in my care. Could I possibly, if it wasn't going to be too much trouble scan them and send him hi-res copies? Complimentary copy of the book, credit on publication etc, etc.

Well, of course I was delighted to be in any way involved with such a project, but there was one little snag and that was that of the two pages, one was a second page with no significant appearance of Wulf and the other was from later in the strips run, when it was occupying a full page on the back of the comic. It had the advantage of being a magnificent example of Embleton's ability to draw horses and warriors at full tilt with Wulf prominent in the action but and it was a BIG but ... it was faded. 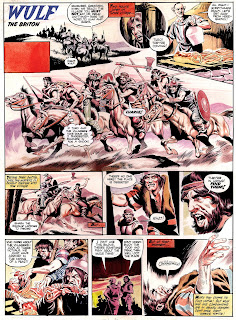 Historical note here but much of the "Wulf the Briton" artwork was mysteriously removed from the vaults of Express Newspapers some thirty plus years ago and has turned up in collections all over the UK and beyond. People have shelled out lots of money for it and eager to enjoy their investment have framed it and hung the work on their walls. If you are one of these people and are reading this, then be warned, Ron Embleton used Pelikan inks for most of his work and whilst they are superb in terms of color they are not, repeat NOT "lightfast". This means that the sun will leech all the colors out of the artwork. starting with the yellows first, followed by reds, until everything goes. You have two options, either take the artwork down and get it re-framed with ultra violet resistant glass (not THAT expensive) or just take it down and store it in a folio or plan chest. Or if you really want to be be an accomplice to the destruction of a piece of beautiful artwork leave it as it is. 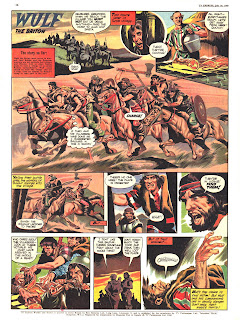 Anyway the piece concerned had suffered quite badly whereas the page 2 (with no Wulf) showed no excessive evidence of such deterioration. I got back to Paul with the warning that the most appropriate page was chromatically compromised, but he was as ever very enthusiastic and keen to use the page in question, give or take a bit of fade.

So I scanned the artwork in and painstakingly assembled the multiple scans (A4 scanner as opposed to A2) and emailed the results to Paul. He was a little disappointed with the results; "the colors look really dull", "well yes they are Paul, I did say it was badly faded, but I'll give it a tweak in Photoshop." 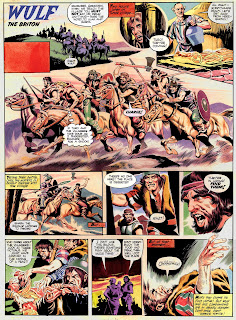 Now ethics began to creep into my thinking, I considered the fact that I did have a copy of the original comic in my possession, but I was keen to see the original artwork in Paul's book as it was, so back I go into Photoshop and start playing with sliders and color balance. Feeling that we'd got some appreciable improvement I re-emailed Paul the results. Close but no cigar, was pretty much the response.

Hmmmmmm ... OK ethics out the window, in desperation I scanned in my copy of the comic and after restoring that page to it's original chromatic values (or as near as possible) I then re-sized it to the same dimensions as the original art scan and carefully laid it as a transparent layer on top. I then painstakingly worked over both layers and hey presto - we finally had an original looking almost as good as the day it left the artist's studio without too much interference or supposition by the restorer.

Looked pretty good to me when I eventually happened on a copy in that enchanted glade of bibliophile heaven otherwise known as erm ...  Waterstones. Honors even as they say. And if all of this is getting your "Wulf" juices flowing I've got some very exciting news on that front which I'll let you know about shortly.
Posted by Peter Richardson at 09:35