"Just Whistle While You Work" - A Brief Encounter With Disney Songbooks 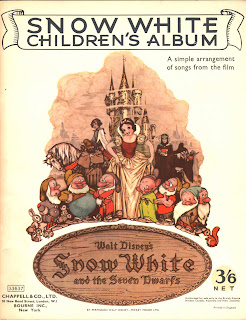 Nowadays Disney iconography is so ubiquitous, it's forever in your face. It wasn't always thus, beyond the immediate perennial face of Disney Enterprises, Mr Mickey Mouse and his cranky stable mate Donald Duck. If like me you were a devotee of the full length animated films, you had definite problems of access. I'm talking here about growing up in the 1960's, when there weren't DVDs, videos let alone the internet. Films like "Snow White and the Seven Dwarfs" would be released occasionally, so you might see that film twice as a child. A film like "Pinocchio", you'd be lucky to see at all as that was not considered such a box office pull and a film like Disney's weird but box office resistant. "Alice in Wonderland" you would probably only see as an occasional excerpt in grainy black and white on the BBC's Christmas broadcasts of "DisneyTime". 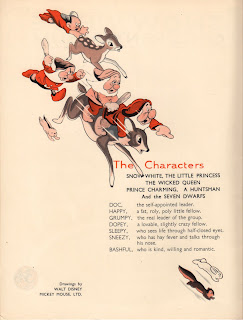 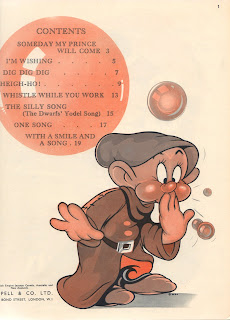 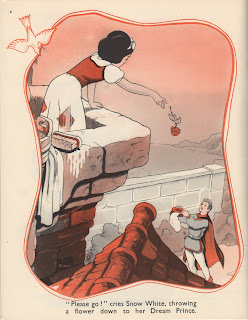 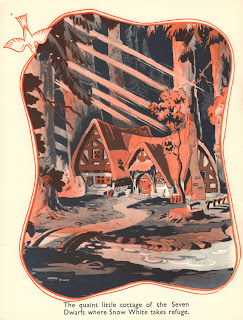 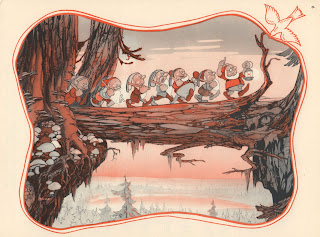 And if accessing the films was a bit challenging then finding visual evidence of their animated existence was even more challenging. Sure there were story books with adapted illustrations for nursery audiences, but finding anything with actual stills from the film was seriously challenging, there just wasn't that much stuff in circulation and dedicated collectors usually ended up trying to charm cinema managers into letting them have a couple of display stills, or a poster or two if the film had come to the end of it's run. Shops were even set up which dealt specifically in cinema memorabilia and there was always a section devoted to Disney animation, but pickings were inevitably thin. Annuals like Maurice Speed's film review would usually contain a couple or so pages on Disney releases, and you could find a selection of black and white and very occasionally color stills included, but the feeling that this was considered very much a niche market was inescapable. 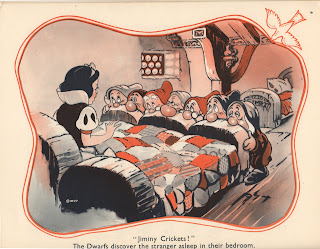 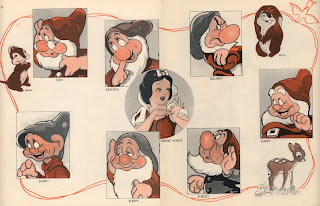 There was one source however that although not quite perfect from a purists point of view was nevertheless a charming means of soaking up some of the exquisite atmosphere that Disney animation evoked. The firm of Charles Chappell in London's New Bond Street had for years provided a source of entertainment for lovers of family sing songs. Yes dear reader (cue Disney intro book with self turning leaves and slushy heavenly choir) there was once upon a time in a land far away long, long ago, a world where televisions didn't occupy every living room (parlor as they were referred to in those distant days). The space that was created by the absence of this drain on people's self motivation was instead often occupied by an upright piano, where Auntie Mabel would bash away on the thing, while the rest of the family would join in for a round of "My Old Man Said Follow The Van". 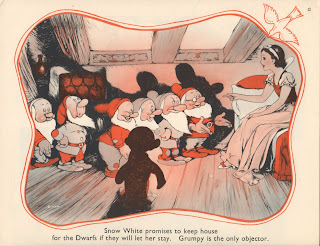 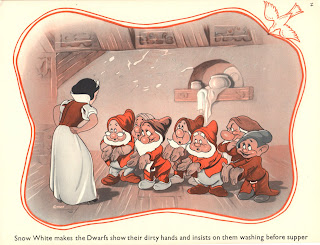 Golden days there were Lawd luvvaduck! Anywise when the novelty of "My Old Man..." palled that's where Messrs Chappell would come to the rescue by providing songs from Rogers and Hammerstein, or Frankie Ray, or even (shudder) Max Bygraves. There was a never ending demand for sheet music and such was the scope of this interest that even the Mouse Factory were called upon to offer up some of their classics and bearing in mind that Disney films used music and song as a brilliantly effective way of drawing in an audience, there was an abundance of material to work with. 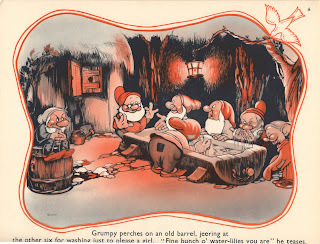 The songs from such Disney classics as "Snow White" were published in a variety of formats but the ones that most commanded attention were the complete song books with artwork adapted from the stills, usually printed in two colors with albeit crude separations, which when viewed through contemporary eyes do give these booklets a distinctly period charm. 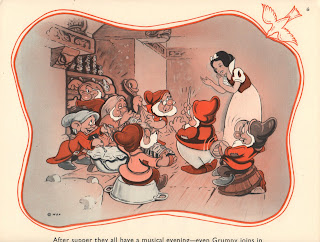 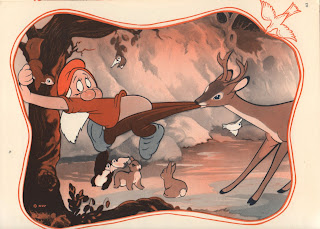 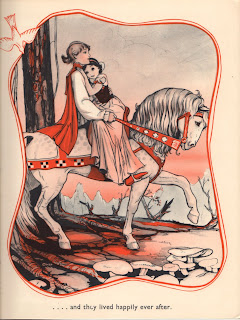 Here then as a taster is the artwork from one of those booklets, "Snow White and the Seven Dwarfs". The cover and much of the interior artwork is by Gustav Tenggren, who featured in an earlier posting on this blog. The rest of the artwork looks to have been based on the cinema stills which were created after the event as no one during the course of the filming of Snow White had considered making production stills, which needed to be photographed, often with the acetate elements arranged specifically for that purpose.