The Genesis of Creepy Part 6

So now the magazine had a title and Warren who had his own links to the old EC gang had petitioned Jack Davis to create a cover. Davis had previously worked for Warren on Kurtzman

's "Help" magazine and in addition had created the sensational looking six foot high Frankenstein poster available available from ... yup! you guessed it - Captain Company. Not only a cover but following very much in the tradition of EC's three "ghoulunatics", Davis was also persuaded to create a tongue in cheek horror host who would provide intros and outros for the plots that Jones and Orlando were spinning at Jones studio apartment at the Clifton building.

With Al Williamson's enthusiastic endorsement of the project artists such as Gray Morrow, Angelo Torres, Reed Crandall and George Evans were at least semi on board with the project, but there was a sticking point. Warren's page rate was $30.00 and not a cent more, Dell and the newly formed Gold Key comics were offering $35.00 a page and for artists of the caliber that were in the frame for Creepy magazine, it was top rate or no go. Warren wasn't budging on this. So out of the $500.00 Jones was receiving for each bi-monthly issue he put together, the young editor decided to dig into his own fee and make up the five dollar shortfall that way. A painful sacrifice when one considers Jones overheads, his rent and utilities at the Clifton were costing him $225.00 per month and reducing his Warren income to $325.00 every two months was injecting yet another fillip of financial uncertainty into his freelance existence. 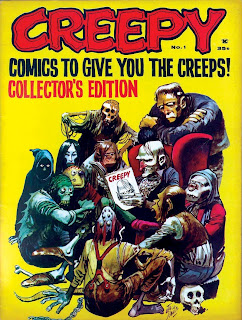 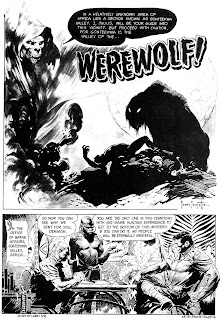 The artists were now on board and even though the script budget was set at a miserly $5.00 a page, the troupe of young writers Ivie, Goodwin and possibly Bill Pearson, working from the springboards that Jones and Orlando were feeding them were more than up for covering all necessary writing chores. Ben Oda one of the premier lettering talents in the business was brought on board and even Frank Frazetta

was persuaded to provide a strip for one of Ivie's scripts on the understanding that he could launch himself onto cover assignments as the magazine gathered steam. Warren would have been more than happy to give Frazetta cover assignments from day one, but ever mindful of the Comics Code Authority he wanted to give the debut issue a light touch and Jack Davis's cover fulfilled that function admirably. 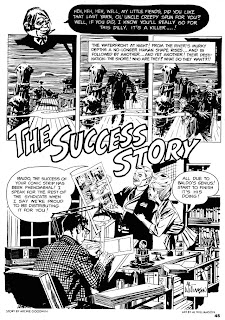 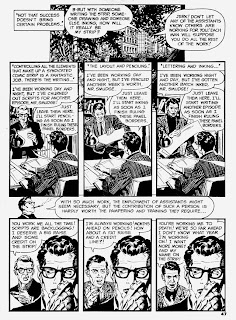 Jones was in an agony of anticipation but as the artwork arrived at the Clifton he became more confident that he was going to be able to meet Warren's high expectations. There were some neat in jokes too as in Al Williamson's "Success Story" the springboard for which was not, as has been occasionally surmised Batman's semi-detached co-creator Bob Kane, but instead Don Sherwood, who's subcontracting of penciling, inking and scripting duties on Dan Flagg had become something of an in-joke amongst Jones and most of the artists contributing to that first issue of Creepy. Williamson puckishly drew himself into the Baldo Smudge/Sherwood role and drew Archie Goodwin as scripter, Angelo Torres as inker and Al McWilliams (possibly) as penciler.

whilst Kable News distributed the thing to news stands the length and  breadth of the nation, the magazine did indeed seem to have a heady aura of success about it.