The Genesis of Creepy Part 8 - Cattlemen, Money and a Party 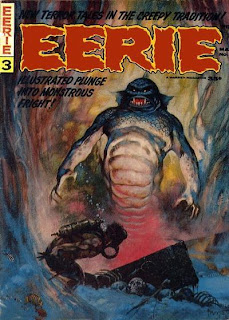 With the launch of a second horror title "Eerie", the mood in the Warren camp was high. Money however was still an issue and Warren anxious to keep his talent as motivated as possible, speculated that if - big IF, sales were strong enough then perhaps they could reconsider the page rate, perhaps even $100.00 per page might be up for discussion. Warren was at times paranoid about losing his talent to rival publishers, even if Fass wasn't a contender there were others, there were always others. His at times obsessive need to win the approval of those within his employ manifested itself in the weirdest of ways and was often counter productive to the results he sought. 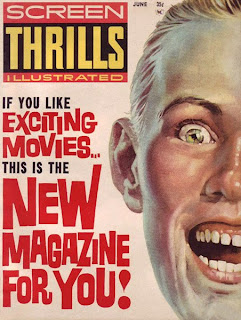 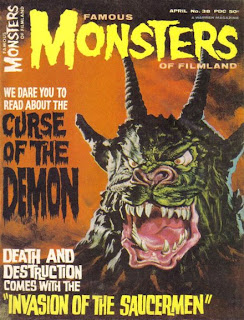 Take for instance another of Warren's soirees at the Cattlemen restaurant, where after launching into an address about what was really going to motivate the assembled talents, he walked around the table peeling off crisp and newly minted dollar bills, throwing them down one at a time next to each stunned artist as he jabbered on, "This is what it's about guys and this is what you're gonna get". As Russ Jones put it, "Frank (Frazetta) looked like someone had eaten his lunch. I mean, the expressions - I thought Gray Morrow was going to get up and leave. Evans, old George, he looked completely bewildered". 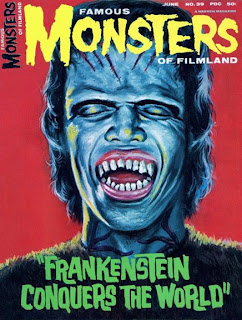 In fairness to Warren the desire seems to have been that if sales returns looked sufficiently vigorous, then a generous hike in the page rate was on the cards. As was mentioned previously, sales returns on bi-monthly magazines couldn't be assessed with any degree of certainty until at least the third or fourth issue, amounting to a wait of eight months. By the time the sales returns from Kable News did come through for Creepy, Warren's confidence in his new venture did seem vindicated, the problem was that by then other parts of Warren's magazine empire were looking distinctly creaky. "Screen Thrills" had to be axed and even "Famous Monsters of Filmland" was struggling, things were getting so bad that Warren's production man Harry Chester was having to fob off an increasingly irate printer and in the end had to go elsewhere when the printer refused to carry Warren any further until the now large bill was settled. 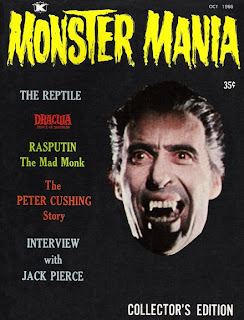 And the delays in payment weren't just confined to Warren's production crew, artists weren't getting paid and as Jones related, as editor of "Creepy" and "Eerie" he was their first port of call. The problem for Jones was that for the moment there wasn't a second port of call as Jim Warren had temporarily gone to ground, he just wasn't taking phone calls anymore and with an increasingly disaffected work force, Jones decided that a meeting with Warren was now called for. The upshot of the meeting was that Jones left having resigned his editorship, stung by Warren's accusation that he just couldn't take the heat and feeling that the job was no longer worth the grief of the $325.00 he was receiving for putting each issue together. 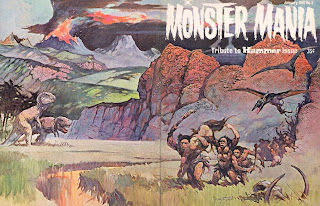 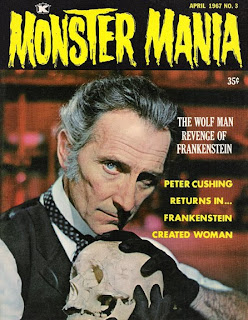 But there was an element of hurt being nursed by both parties to this contretemps. Jones had during the time he was living in New York met a girl and since they'd started seeing each other was no longer as available as he was a year earlier to engage in the 24/7 devotion to duty that Warren expected of his editors and if Jones had to choose between ministering to James Warren or his girlfriend, then it was going to be the girl every time. Added to which Jone's girl couldn't stand James Warren and when at around the time of their engagement they threw a party with many of the movers and shakers in the comics industry as guests, including Frank and Ellie Frazetta, Al and Arlene Williamson, John and Cathy Prentice, Irwin Hasen, Stan Drake, Leonard and Betty Starr, James Warren was left off the list. Despite Jones intercession on Warren's behalf his fiancee was having none of it - there was no way that "that man" was going to be invited. Warren was deeply hurt by this rejection and the event definitely soured their relationship. 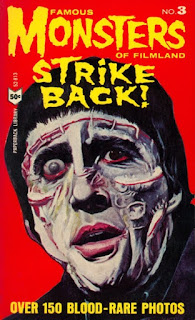 Jones's career was however not in jeopardy and whilst the avuncular Archie Goodwin assumed editorial control of Warren's horror comics, Jones amongst myriad other activities, went on to produce three issues of a Hammer film centric magazine titled "Monster Mania". There were only three issues but they were brilliantly put together at a time when the U.K.'s Hammer Film Studios were making real waves internationally. Compared and contrasted with the bulk of U.S. monster magazines (including Warren's "Famous Monsters") which were still fixated on Universal Studios now distinctly dated output, there was no contest. The magazines caught the eye of Hammer Films executive producer Anthony Nelson Keys and before too long Jones was over in the U.K. working as a scripter for Hammer Films.

Warren in the meantime airbrushed Jones out of corporate memory, even in interviews avoiding mentioning him by name although he wasn't above occasionally recycling some of Jones artwork as in the case of the somewhat superior re - presentation of Jones' portrait of Christopher Lee as Frankenstein's monster, originally published as 50% of the "Horror of Dracula/ Curse of Frankenstein" movie comic.

More on the creation of Monster Mania and Russ Jones other activities can be read at his fascinating site located thisaway.

P.S. I may well come back to this story as although I having fulfilled the original brief to throw light on the creation of James Warren's line of horror comics the tale has a lot more of interest and perhaps a continuation of this sequential history might be an idea if you the reader would be interested.

I should also point out that much of the research for this series was drawn from Jon. B. Cooke and David Roach's extensive interviews and writings on the key players, much of which (but not all) was contained in the now long out of print "Warren Companion".

Posted by Peter Richardson at 10:16