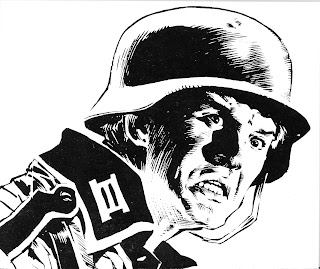 The number of simply superb Spanish and Italian illustrators and painters, who refined their craft in the UK comics of the 1950s-70s is simply astonishing. In fact the phenomenon was part of the rationale behind a fanzine that I used to print off on a desk top printer some twelve years ago. Achtung Commando! was founded on the principle that there were a lot of people who were into Commando comics who just didn't seem to know that many of the artists they were oohing and ahhing over had worked far and beyond the confines of the pages of the world's longest running pocket library. Similarly, there were devotees of Warren comics that were blissfully unaware that many of the artists whose work they were so captivated by had actually learned their trade working for publications such as Commando and it's Fleetway rivals War, Air Ace and Battle Picture Library. 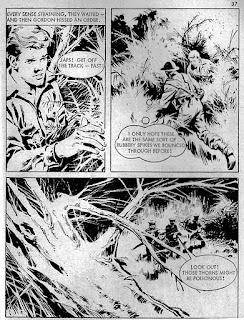 The little A5 fanzine was printed in full color and hand bound and trimmed with glossy covers, the whole operation crunching through buckets of Epson ink cartridges. Unbelievably, even with the deterrent cover price of £15.00 the little fellas sold well, in fact sales for each issue were well into three figures and there was always demand for back issues. There was a niche market who seemed to enjoy finding out more about Commando and more specifically the people behind the comics. All in all it was a fun project and I got to network with a lot of fellow enthusiasts as well as having the fun of interviewing many of the artists and writers. 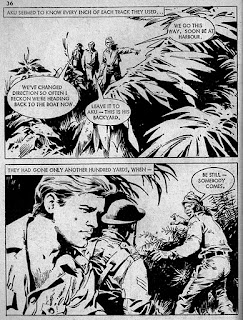 I am very much reminded of those days as I work on the last elements of the first volume in Book Palace Books new publishing venture Illustrators, which includes a fascinating interview with Ian Kennedy, who is to many enthusiasts forever associated with Commando, but as the interview and accompanying artwork attest, there is a lot more to be explored. As I cast my mind back to creating that first issue of Achtung Commando!, I remember chatting to the ultimate resource for UK comic historians, Mr David Roach. David as I have mentioned earlier is the man that appears in the credits for many comic and illustration retrospectives, as he is such a passionate researcher of all this material. 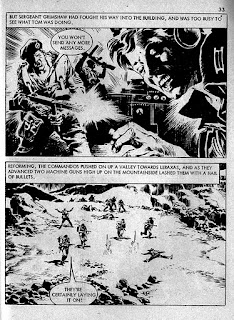 David it was who identified one of my all time favorite Commando artists (although he only did perhaps two or three issues). Juan Gonzalez Alacreu (not to be confused with Pepe Gonzales of Vampirella fame), was a consummate draftsman and a man obsessed with light and form. Like many of his contemporaries working in Barcleona's busy studios, he would utilize photos for many of his facial references, but his mastery of form and design enabled him to use such props creatively rather than being restricted by such aids. His fascination with light and capturing it's effect on form, made his work stand out from his contemporaries. He would literally take a scalpel blade to the surface of his work to add reflected light and texture to add further dynamism to his drawings.

Here's some examples from a couple of Commando comics; Dangerous Dawn and Terror Team (both worthy of inclusion on Commando's current list of titles worthy of reprint) from the late 1960's and here are some much more recent examples of his paintings which show the same preoccupations in an albeit much more serene setting. 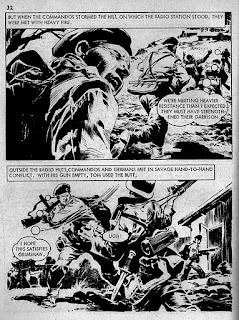 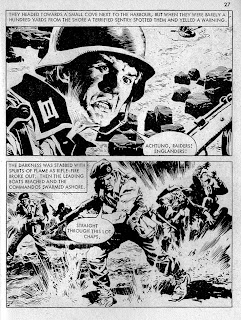 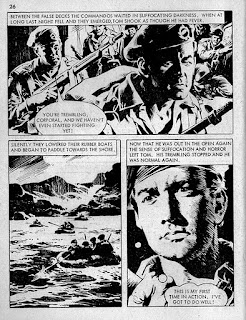 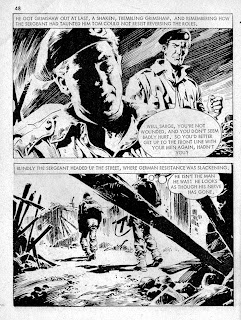 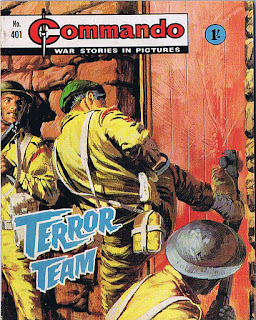 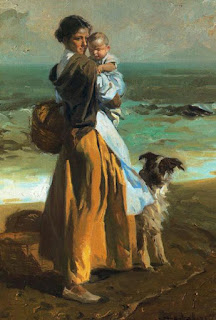 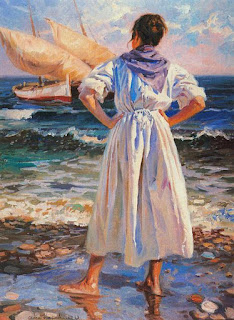 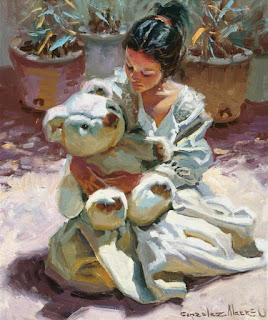 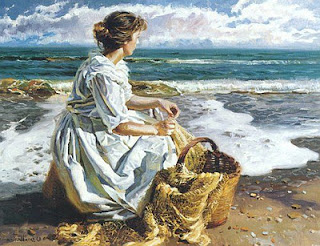 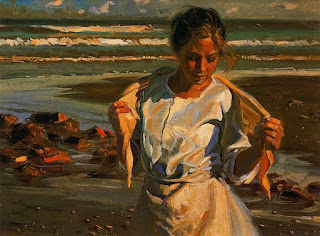 And while we're about it, here's the latest four issues straight from operational HQ in Bonnie Dundee:

In the early days of the Second World War, men too young, too old or too infirm for the regular services flocked to join Britain’s Home Guard to “do their bit.” Because of this, the units were dismissed as a bit of a joke in some quarters.
If those nay-sayers had listened to the conversation in one Home Guard headquarters on a night in 1940, though, they might have changed their minds. For as the men there shared their stories it became very clear that they had fought, and would fight again. And fight like the demons they were.
Invaders beware! 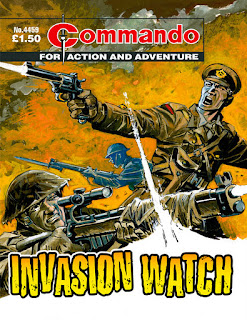 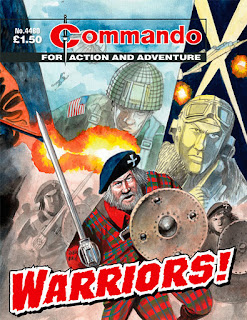 Fighting men come in all shapes and sizes. They wear different uniforms and follow different flags. But the best of them share one quality. And that one quality marks them out from everyone else as men to be feared and respected in equal measure.
That’s the quality that marks them out as…

Alan Burnett and Colin Harvey flew as the crew of a Boulton Paul Defiant night fighter. They shared the same room and spent almost every second of every day with each other…yet the very air around them seemed to vibrate with the fierce hate they had for each other.

But, despite their bickering and brawling, they had the highest score of kills in the Group. How they kept it up was their own special secret…

The Boulton Paul Defiant was one of many planes which didn’t quite live up to their designers’ hopes. But you’d never guess that from Ian Kennedy’s dynamic cover where, as only he can, he turns the world on its head to create another perfect composition.
Inside, John Ridgway — in only his second Commando outing —delivers an ideal complement to the cover, his crisp, accurate linework being perfect for aircraft illustration. Being a trained draughtsman is quite an asset.
The script, by Brunt, gives them him full rein to tell the Defiant’s story while at the same time touching on some of the super-secret “boffins’ war” that went on behind the action in the Second World War. 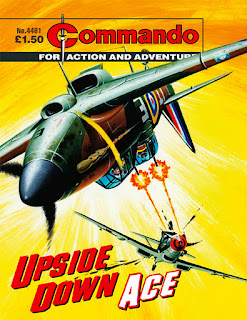 Death Of A Wimpey

They found an abandoned plane in the desert, sand almost covering it. The paint was hanging off in shreds, the engines had seen better days and the fuselage was riddled with bullet holes. But it was still a Vickers Wellington bomber…one of the tough, famous Wimpeys. And it could fly — just.
So the men who found it, three army deserters and a no-good R.A.F. pilot, began to make plans to get back into the war — flying their own private bomber!

At the end of October last year at the Dundee Comics Day, two men were honoured for their outstanding contribution to the comics artform. Though they are not related, they share the same surname and, as you can see from this book, they have both worked for Commando. 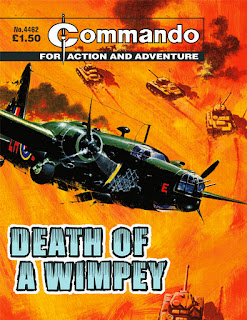 I’m talking, of course, about the two Kennedys, Cam and Ian who together have produced the art for this tale. Ian’s cover wonderfully captures a stricken Wellington bomber trying desperately to land, while the characterisation and movement Cam brings to the inside art is outstanding.
…And let’s not forget scriptwriter Ken Gentry without whose contribution this classic Commando story the two Kennedys would never have had the chance to showcase their talents so well.
By the way, I got to present the awards — how cool is that?