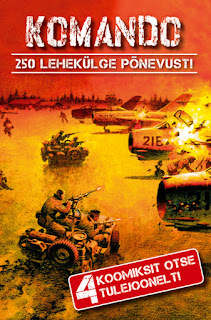 I was the happy recipient of a recent news item from Calum Laird, editor of  the UK's longest running and now 50 year old war pocket library. We are of course talking about Commando, which you'll be pleased to hear has an audience well beyond the shores of this green and sceptre'd isle. Yes indeedy, amongst the far flung readership of this long running comic, the people of Estonia have access to tales of derring do which emanate from the sandbagged redoubt of Commando HQ located in Dundee.

So here is the cover of a new four in one selection of Commando stories. I'll hand over to Calum so that he can provide you with more details:
Latest news from Estonia is that a four-in-one Commando selection is about to go on sale.

The stories inside will be:

4171 Raiders On The Rampage

All four have stories by Ferg Handley, inside art by Keith Page and covers by Ian Kennedy. And, as you’ll all know, they are stories featuring our own special forces team Ramsey’s Raiders. 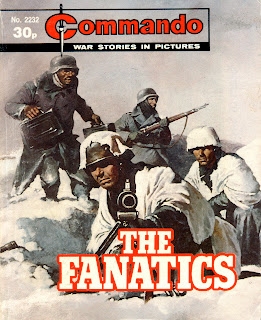 The fact that in Estonia Commando is called Komando, got me to thinking about several of the truly stunning covers that the great Gino D'Achille created for Commando in the late 1980's, back in the day when Maggie Thatcher was de-regulating the City (what a great idea THAT was!), a bloke called Loads Of Money was popping up all over the place and Terence Trent Darby was outsinging and outdancing Michael Jackson and Prince and being hailed as the biggest thing since Elvis.

It all seems like such a long time ago...

Anyway I digress and regress and am playing with your attention span to the peril of this posting. 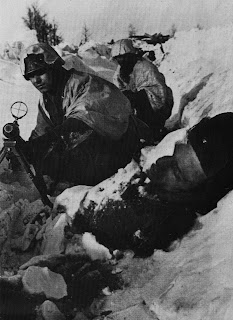 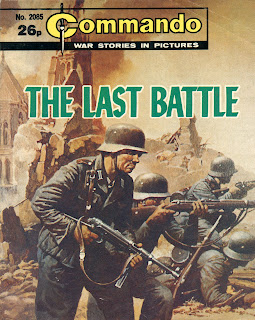 So back to Gino D'Achille and his Commando paintings; I gather that the way these covers were supplied was that the paintings were bought in by Thomson's from D'Achille's agent and stories were found after and not before the event. The paintings tend in the main to focus on the beastly Huns as opposed to the doughty Brits. Probably because not only were the teeth of the average Whermacht squaddie in far better shape than his British counterpart, but also their uniforms were infinitely cooler.

Such observations were of course a luxury that the luckless inhabitants of occupied Europe didn't have much time to dwell on, particularly if they had the misfortune to live in Soviet Russia, or Poland where a couple of the photos that D'Achille used as springboards for his paintings originated from. 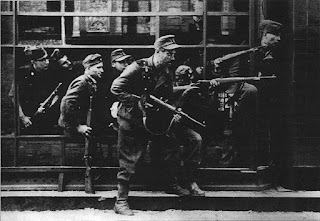 In the first photo you can see how D'Achille, mindful of not dwelling overlong on the negative aspects of war on the Eastern front, has omitted the dead Russian from the snowbound trench the MG 34 gunners are setting up in. Whereas in the second photo, the artist has sourced his photo from a series of photographs of the razing of Warsaw in 1944 (not to be confused with the suppression of the Jewish uprising in the Warsaw Ghetto a year earlier). The soldiers who feature in this photograph are from the notorious Dirlewanger Sonderkommando. Named after their founder and leader Oskar Dirlewanger and initially recruited from imprisoned poachers and SS penal battalions. These people were a truly loathsome bunch, even Dirlewanger himself had initially been sprung from jail for the rape of a thirteen year old girl by one of his mentors. Needless to say, they set about their abominable tasks with unholy relish. 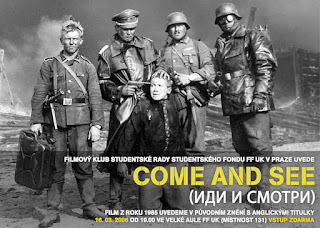 Not the sort of stuff to serve up to the younger or more sensitive readers of Commando, the closest that anyone has got to conveying the true horror of what outfits like the Dirlewanger Sonderkommando enacted on their victims is film director Elem Klimov's searingly vivid film Come And See which was released in 1985 and which utilized effects and cinematic techniques that Steven Spielberg would revisit some thirteen years later in the combat sequences of Saving Private Ryan.
Posted by Peter Richardson at 21:11