But Sir I Can't Draw Horses!!! 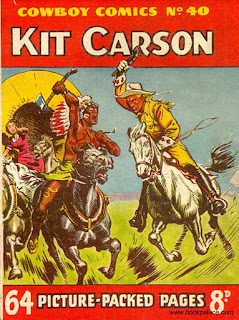 When the legendary AP editor Leonard Matthews was looking for an artist to undertake work on a forthcoming series of comics under the title of Cowboy Picture Library, he approached artist Geoff Campion whose punchy and vibrant artwork was just what the visionary editor had in mind for spearheading this new line of monthly pocket libraries.

Bear in mind that this was in 1949 and a moment in time when as an antidote to post war austerity and in an era when even TV was a rarity, the UK was on the cusp of a real renaissance of comics publishing with Hulton's Eagle comic due to launch that following spring.

But for the majority of boy's adventure fiction, especially the sort that Matthews favored, horses rather than space ships were the de rigeur form of transport. In other words, to have any hope of a sustainable career as a Matthews comics artist, you were going to have to engage with equestrianism. 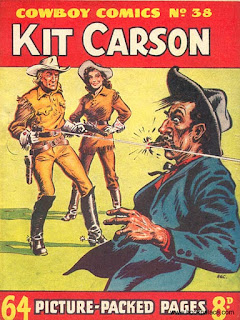 This was something Matthews was very mindful of when with his usual direct manner he retorted to Campions' observation that horses were not something he was comfortable with drawing, "Bloody well learn then!".

Campion was sent off with his first Cowboy Picture Library assignment and a pile of pages by Matthew's most favored Wild West artist, Derek Eyles. Eyles who was born in North London in 1902, had been creating bravura paintings and drawings for the Amalgamated Press since his stunning paintings first started appearing in Chums in the late 1920's.

His earliest paintings were distinguished by a vivid and rumbustious application of paint which was in marked contrast to his later work as these samples demonstrate. 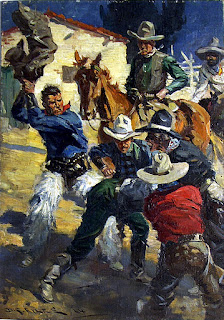 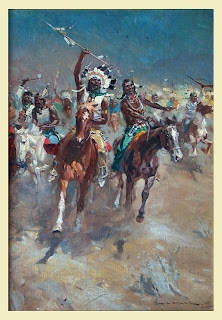 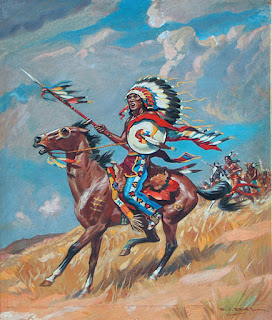 Meanwhile Campion went on to deliver just the kind of cowboy comics that Matthews craved, to the extent that the editorial imprimatur was extended to Campion as fledgling artists were sent on their assignments with samples of Campion's pages to Look and Learn from.

More of Eyles work can be viewed on the Look and Learn website.
Posted by Peter Richardson at 09:31