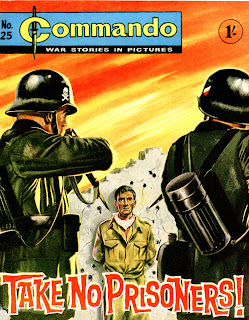 Over at Commando HQ, editor Calum Laird and his team are canvassing nominations for Commando comics which readers would like to see reprinted. I'm pleased to see that one of my all time favorite stories Man-Trap (Commando No. 184) is already on the list of worthy contenders, and if you have suggestions I would urge you to visit the Commando website and post your suggestions. 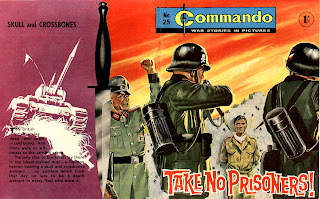 Here's another of mine, one of the earliest Commandos and one whose cover was so shocking for it's time that it absolutely commanded your attention. In addition to the powerful Ken Barr cover, the script by retired Major Eric Hebden and artwork by Jose Bielsa made for one of the most memorable comics of this title's first year. It's worth mentioning that although DC Thomson would always supply photographic reference to their artists, the selection of appropriate photos in 1961 just wasn't that great. Hebden's script demanded a certain amount of licence  as he described a death's head insignia on the SS men's helmets, but in reality this would have been a collar flash and not helmet decal. The reference that Thomson's seem to have supplied Jose Bielsa looks as if it was sourced from a photograph of Finnish troops who fought against their traditional enemy the Russians as part of the Nazi's allies. The photograph in question shows a group of Finnish troops in 1945 wearing remarkably shoddy looking tunics and German 1942 pattern Stahlhelms (apart from the man on the far right wearing a 1916 pattern helmet) decorated with the somewhat outre Finnish devised skulls used by Bielsa. Barr's cover is a tad more convincing in regard to the uniforms but still way of the mark compared to a photograph of the kind of SS troops that British troops would have encountered as the following photograph depicts. 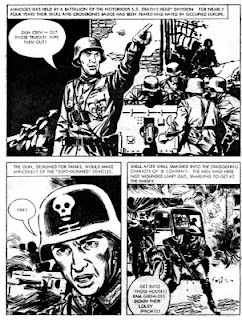 But don't let this deter you from casting a vote for Commando No. 25 - or any other Commando that takes your fancy for that matter.

It's all part of the fun of this remarkable comics fiftieth birthday celebrations. 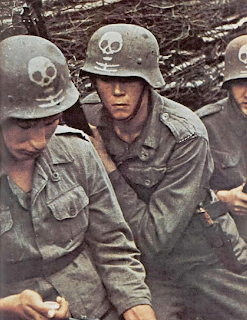 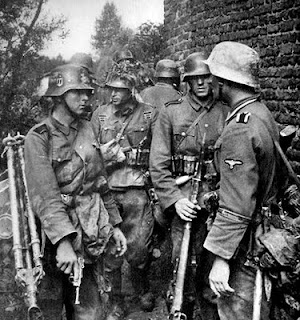