More News From Commando HQ and a Teaser From Mr Flake

As in Mr. Flake your sometime blogmeister. The good news is that the mad surfeit of work is coming to an end and I can devote more time to this much neglected blog. But and here's the even better news, I am working on a project which takes the very generous observation of Mirabilis author Dave Morris, about wishing that some of the subjects that we have covered on this blog over the last two years could be published then wouldn't that be cool or words to that effect.

Well I have an even better thought and that is that wouldn't it be great if several of this countries most energetic ephemera enthusiasts got together to commit their researches to print rather than blogoshere then wouldn't that be even cooler?

Well just such a project is in the works and more will be revealed shortly.

In the meantime, here is a double biller of current and imminent Commando's from Calum Laird and the boys at Commando HQ. 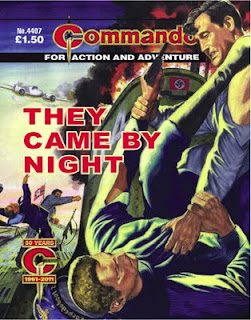 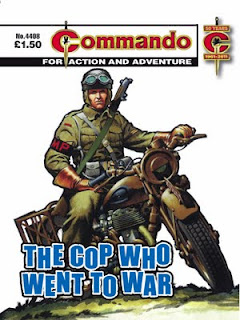 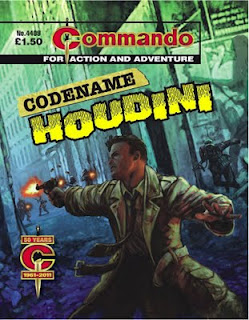 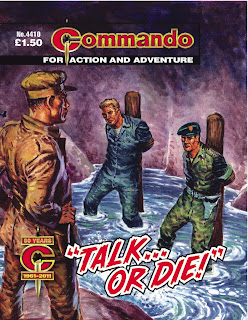 Without warning the periscope of a U-boat broke the surface. It turned and focussed on the Locksea Lighthouse. Then, slowly, the glistening, black hull of the submarine came up from the depths.
No one could deny the courage and cool cheek of the Nazi Commander who had made up his mind to capture this vital link in the guiding of our Atlantic convoys.
Then, into what was to be the most fantastic episodes of the war, sailed Skipper Jimmy Cleeves and his RAF rescue launch K20.

Nowadays Commando writers have it tough. In our 50 years, loads of plots have been used, and they have to try really hard to find a new angle on things. Back in 1961, though, when Commando first broke cover, the writers had a very open field to work with.
So you might think that this sixth story to come out would be very straightforward. If you did, you’d be wrong. It has ships, subs, bombers, recce planes, a lighthouse…and even a carrier pigeon.
Even when they’ve got it easy, Commando authors just can’t help writing cracking stores.

Dave Marley was a policeman ⎯ and proud of it. When the war came, he joined the Military Police and found that a lot of soldiers acted just like the blokes in civvy street who didn’t want to know a copper until they had trouble.
But now there was more than brawls and bank robbers to think about. There were difficult problems to be tackled with the added danger of shells and bullets crashing all around. Yes, it was a tough job, being a Military policeman…

The Military Police do a difficult and dangerous job, and it’s not always appreciated by the common soldier, sailor or airman. In the rough and tumble of war, men fresh from action often don’t take it well when a Redcap gets on their case. How to win the doubters over? Prove that you are as tough and as capable of dealing with the enemy as the front-line fighters are.
Roger Montague shows this up well in a crisp 1975 script and Ibanez-Igual did his bit with the line artwork. The cover? That’s Ian Kennedy, of course. He draws a mean motorbike as well as the aircraft he’s renowned for.

Andor Lakatos and his two younger brothers were a popular circus escapology touring Eastern Europe just before the start of the Second World War. When the Germans invaded of Poland in 1939 the three brothers were caught up in the chaos.
Andor, in particular, was drawn against his will into wartime espionage, given the codename Houdini after the great escapologist.
With danger at every corner it seemed unlikely even Andor could escape this murky world of shadows and treachery?

It seemed a straightforward job, risky but straightforward. Flying a helicopter full of gold out of South Vietnam before the advancing North Vietnamese army got their hands on it.
As an ex Australian Air Force chopper pilot, Brendan Beckett thought the job would give him no real trouble. So how did he come to be tied to a post, knee-deep in rising water? Well, it’s a long story. 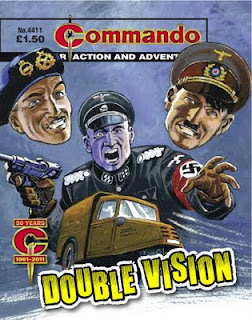 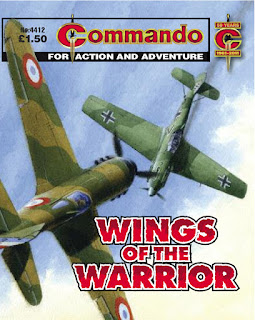 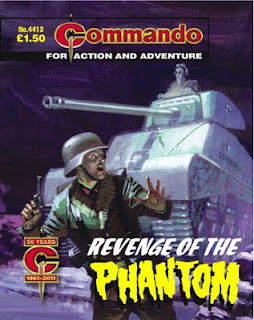 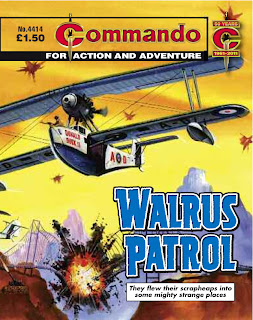 Remember Max Singer and Sid O’Brien and their adventures when they played the dangerous roles as doubles for Adolf Hitler and Field Marshal Bernard Montgomery in Commando “Seeing Double”?
Well, they’re back...And in deeper trouble than ever!

Marc Lebel was a young, hot-headed French Air Force pilot, determined to halt the Nazis. But when his mentor died saving his life, Marc’s thirst for revenge looked like it would be the end of him as well…

Commando 4413 Revenge Of The Phantom

Major Gunther Stolle of the SS did not believe in ghosts — a brutal thug like him didn’t bother with such nonsense. Even when tough German troops broke and fled, gasping out tales of a phantom tank crew, he still didn’t believe it.
But soon he was going to know the terrible truth, for the commander of the tank had vowed to hunt him down…even from beyond the grave!

They say you can’t beat a good ghost story and here’s the proof. There’s not only a ghostly crew but their tank is a phantom too. The advance up through Italy with British-manned Sherman tanks…plus dastardly nasty Nazis adding to this witch’s brew…chills and excites with every page.
John Ridgway made the spirit flesh in 1974 and Penalva carried on the theme with a spine-chilling cover. Excellent work from Alan Lomas with the script and it’s a great treat for Halloween…or any other day of the year. Just don’t read this one alone or in the dark…

They flew their scrapheaps into some mighty strange places

Donald Ducks, Flying Scrapheaps, Rattletraps. Walrus crews got fed up of the names other blokes called their big clumsy Walrus flying-boats.
Then an RAF desert bomber group asked for fighter support and, to their horror, in lumbered two air-sea rescue Walruses!
Not until their own bombers were destroyed the day before a big raid did the RAF scoffers find out what those “rattle-traps” could do in the hands of pilots like Bill Donovan and Al Tucker.
Then “Donovan’s Ducks” took off in a blaze of glory.

It’s strange what sticks in your mind through the years. When I came to re-read this for the first time since the late 60s, I could clearly recall the picture near the start of the story where the British aircrew were struggling in the water as sharks circled them. It was as good a use of applied tone as ever I’ve seen but that’s no surprise, the man who did it was Gordon Livingstone, an expert.
His inside art more than does justice to the story, while Ken Barr’s cover depicting two Walruses doing what no Walrus should piques your curiosity so much that you just have to read it. Well, go on then, what are you waiting for?