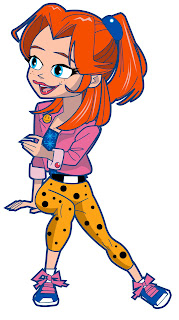 Here's my first ever attempt at working up a Manga style character, it was done for a soft drinks firm and the brief was to create a variety of kids in different drawing styles and in desperation I launched myself into learning Illustrator on the back of a Computer Arts Mag tutorial which neatly explained how to create a Manga style character using Illustrator as your principal drawing tool. This little beauty was in many ways the inspirational touchstone for the kids that would ultimately inhabit the myriad worlds of Cloud 109, the ongoing graphic extravaganza being lovingly crafted by David Orme and myself.

I will admit that while I love certain aspects of what is referred to as Manga, there is a lot of it that leaves me cold. At it's best it's a real transport of delight and I have to admit when it comes to Japanese animation and the works of The Studio Ghibli I am totally in it's thrall.

But at it's worst and there's a lot of worst out there, it simply seems to feed on itself, repeating an overly formulaic approach to storytelling and characterization. When it gets exciting, as in all creative endeavours, is when the artist is sufficiently confident to be able to absorb what they require and then happily discard the rest of the friggin' rule book rather than be enslaved by it. There are some young British creators that are clearly influenced by Manga but still managing to do their own thing with great verve and panache, wonderful artists such as Emma Viecelli, Kate Brown and Paul Duffield spring immediate 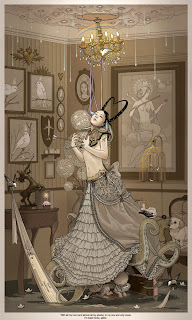 ly to mind and across the pond there is a really "other" artist by name of either Logyu or Milk who produces work which just takes your breath away. All I know about this woman is pretty much what it says on her MySpace - she's 33, originally from the Phillipines and is self taught. The fact that she is self taught should be a source of inspiration to young illustrators contemplating acquiring £20,000.00 and upwards worth of debt to put themselves through university where contact hours and lecture facilities are under downward pressure while their costs are spiraling in the opposite direction.

Anyway I digress, here's some of her amazing work and check out her MySp 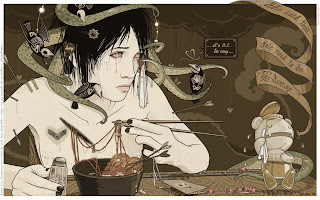 Manga is a good starting point but it's definitely not the whole story - so be inspired and be yourself.
Posted by Peter Richardson at 08:40