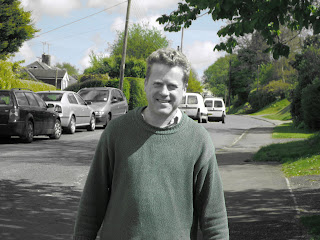 Directly across the road from me, I have the most delightful neighbors Charles and Miranda, who really do in many ways epitomize all that is best about middle England. Charles who is now a little over fifty, is small energetic, with bright blue eyes which seem to radiate a perpetual wonderment at the world that surrounds him and with an admirable shock of curly blond hair swept back from a forehead that radiates intelligence he comes across as one of those perpetually youthful ex public schoolboys that have long been part of the Brit national consciousness.

And in truth he is, both he and his brother Jon who lives a little up the road from us and is another illustrator, were bundled of to Oundle for much of their formative years, there they were taught the kind of leadership skills that will get you out of any situation no matter how parlous 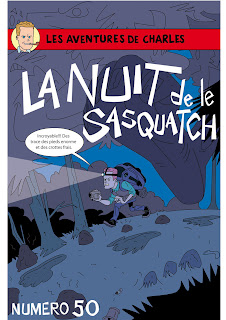 the prospects may seem to those of us with a more fatalistic bent. Charles like his brother Jon is a talented artist but years ago gave up on the attempt to eke out a living from his painting and pragmatically settled on a job to support his wife and three, now teenage, children. So he sets off for his walk to the station at 6.45 am every morning come rain or shine, with army knapsack reminiscent of the B.E.F.'s brief expedition to France in 1940 slung over one shoulder ready for a day sorting out customer complaints for a rail company whose travel policies ensure that Charles and his colleagues will be kept busy throughout the week.

However the flame of creativity still burns brightly in Charle's breast, last year he won second prize in The Guardian's short film competition and he is even as I type, making plans to film another pet project of his which is his ongoing quest for The Sasquatch. Convinced that the great shaggy behemoth does indeed exist he has been on a couple of expeditions to British Columbia in search of the thing, all to no avail but this only acts as a further tantalising impetus that pehaps the next expedition will reveal something more tangible. The artwork enclosed is in fact a card I knocked out for Charles' fiftieth birthday in honour of his admirably eccentric fixation on Bigfoot.

All in all Charles is the epitome of "The Chap", in fact when I remarked to his brother Jon that all Charles needed to complete the illusion of seamless "chapdom" was a pipe, Jon replied, "Funny you should say that, he used to smoke one". It was also Charles that introduced me to the existence of a subscription only magazine entitled The Chap and if you check out their website you will discover all kinds of advice on the finer arts of cap doffing and pipe smoking and some fabulously retro illustrations to aid your quest in these regards.

As I was at this point about to terminate my subscription to Mojo magazine which I realised a little late in the day "quelle horreur" had turned into a Dad's rock zine with a rotating cycle of old farts comfort blankets adorning their covers i.e. Dylan, The Beatles, The Who, Led Zeppelin, Pink Floyd, Queen, Clapton et al - they actually did run one cover with Amy Winehouse but the howls of approbrium from the geriatric readership steered them back into more familiar territory and it was good old Fleetwood Mac the following month. I mean Jeez, I know I'm old (ish) but I don't need to be patronized to that extent and if the rest of their readership do then I don't want to hang out with those kind of losers any more.

So onwards and upwards, having seen the glories of one of Charles' Chap magazines I decided to ply my troth with the finer arts of Chapdom and sent off my £17.00 sub (17 guineas would have been more apt methinks) to the gentlemen of The Chap. Mojo could go hang. I would discard the leather jacket and Cramps T-Shirt in favour of a hacking jacket and Argyll sweater plus Trilby to set the whole thing off. 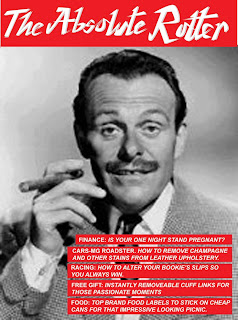 I then waited with a degree of the boundless but nevertheless restrained, disciplined even, anticipation that so characterises your average Chap.

Nothing happened - weeks went by and the magazine still hadn't arrived. By now my mind was working overtime but ever resourceful as Chaps in crisis are supposed to be I settled on a plan of action with the aid of Charles whose quintessential grasp of all the finer points of chapdom would I felt enable us to get the blighters to relent and send us the magazine we so eagerly craved.

So between Charles and I we concocted the following rival publication, with an accompanying email to the editor:

I have the most woeful tale to tell. I first encountered your wonderful sounding publication when I was seeking guidance in the now sadly neglected pursuit of pipe smoking. A dear, dear friend of mine guided me to your lovely website and upon steering my craft through cyberspace I was immediately smitten, nay enchanted to sample the delights within.

I was so hypnotised by the allure of Chapdom and the myriad delights it seemed to promise, that in spite of my personally distressed circumstances and envisaging an editorial team of eager and thoroughly reliable gentlemen bearing an uncanny resemblance to David Niven (editor in chief), Kenneth More (editor), Richard Todd (features) and John Mills (pictures) with Ian Carmichael as the office boy, that I promptly made a payment via my credit card to your esteemed publication.

That was on the 11th June and sad to say I am still in a Chapless if not hapless state.

We are now well into August and it's (somewhat late in the day) dawned on me that I am never going to receive your publication. The editorial team I had so naively conjured up does not exist, instead the real team look horribly like Alastair Sim (editor in chief), Terry Thomas (editor - you have been unmasked "Gustav"), Dennis Price (features) Leslie Phillips (pictures) and George Cole as the office boy.

But I am not one to bear a grudge and so am not sending you this message to in any way upset your day as you wend your well trodden path to the bars and drinking dens of Fitzrovia but instead to thank you for inspiring my dear, dear friend and I to create a rival publication with you as our figurehead.

which we promptly despatched to it's editor Gustav, actually not quite the sort of name for a Chap editor something like Monty would be more apt methinks).

Anyhow eventually we did in an almost anti-climatic way receive the actual Chap magazine itself. A couple of issues languish forlornly by my bedside, it's now horribly professional looking and has lost a lot of it's original cobbled together charm but it's still a good read, thoug 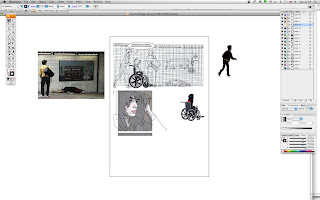 h I'm now thinking about the Absolute Rotter as a fun alternative.

But then there's always Cloud 109 to think about - now over a third the way to completion of book 1.
Posted by Peter Richardson at 08:10