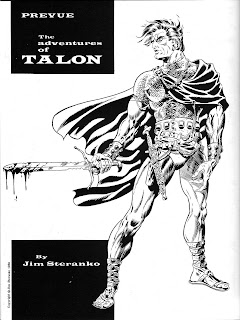 Well it's Sunday, I've slept in as a consequence of two nights down our local (not something I make a habit of but fun on occasion) but as a consequence I am in a bit of a blogsville kerfuffle.

So I'm going to use this as an excuse to run some more of my all important influences past you guys. This is stuff that burned it's way into my subconscious from an early age and even though I wasn't that gifted in terms of draughtsmanship, these were the guys that I wanted to emulate and I did spend endless hours soaking up their collective genius.

Pre-eminent amongst a new wave of comic artists who sprang onto the scene from the mid sixties onwards was a phenomena by name of Jim Steranko. By the time the twenty se 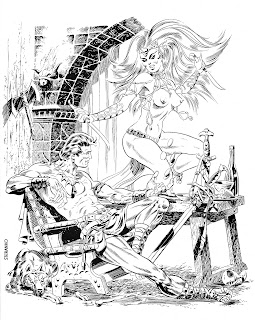 ven year old Steranko first entered the world of comics, he had already done a lot of living. Having grown up in grinding poverty Steranko had realised that the only way forward was to push himself into the light by dint of his own resources as he was getting precious little encouragement from home. Consequently he devised every means possible to develop his talents, teaching himself to draw by copying newspaper strips onto discarded envelopes which he flattened and then drew upon, then funding his art materials by collecting empty soda bottle for the return of the deposit on them.

He studied his father's books on magic and hired his talents out to circus's and carnivals, developing skills as an escapologist, illusionist and fire eater. Inheriting his father's musical abilities he also performed in a rock n' roll band frequently sharing the bill with Bill Haley and the Comets, where Haley's guitarist and the teenage Jim became good friends.

He then further developed his graphic skills working for a printing company in his hometown of Reading, where he designed flyers and posters for local dance halls and the like. After five years he moved on to work in an advertising agency desiging layouts for a variety of ads and campaigns. 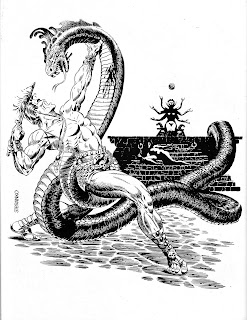 Compared to the average twenty seven year old now, who most likely will have completed a three year university course and nowadays an additional post grad, with perhaps a gap year thrown in and a couple of internships, Steranko comes across as someone with a CV that puts him into the super league.

It was his ability to think beyond the confines of what was the accepted norm for comics art that made Steranko's work so exceptional and like Barry Smith who I mentioned in an earlier posting although he was hugely influenced by the work of Marvel's premier super hero artist Jack Kirby it was what he then did with those influences that so attracted the fanatical fan response to his artistry. 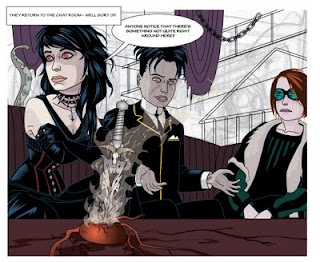 in America and Nick Fury was such that it is still being reprinted and talked about today. He subsequently went on to found his own publishing company, pursue a career in illustration and provide concept artwork for a variety of Hollywood films.

He did work at a variety of other comic projects that were destined to remain unresolved and
following in the wake of the revival of Sword and Sorcery Sagas he created some fabulous concept artwork for a Conan'esque character named Talon, which I'm going to run past you now.

In the meantime I've missed my self imposed deadline as page 19 was supposed to be completed yesterday but I'd overlooked the fact that I needed to complete my VAT return but what the hell! Nearly there.
Posted by Peter Richardson at 10:09