One of the many fun aspects of creating the world of Cloud 109, is the ability to be able to take David Orme's wonderful script and just have a bit of extra fun with it. 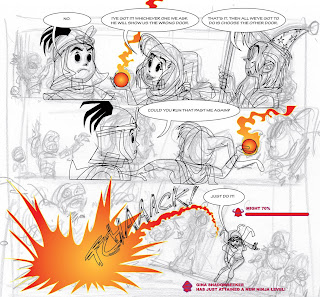 controlling just how the artist breaks down the scene, there are varying degrees to which a writer will do this, but at it's most extreme, there will be detailed descriptions of the contents of each panel and even the "camera" angles the writer wants to see employed, much in the way that a film director would ask for.

David au contraire is remarkably liberal in this regard and hence we can achieve much more of a collaboration in terms of input into some of the gags involved.

Here's an example; the script for page 15 of Cloud 109, calls for the increasingly bemused teens to question a couple of less than helpful jailers. The old conundrum one jailer always lies, one always tells the truth, you are only allowed one question per jailer. how do you work out which of the two doors do you open?. This part of the game is set in a labyrinthine dungeon, very much in the vein of the old cult classic RPG "Dungeon Master". 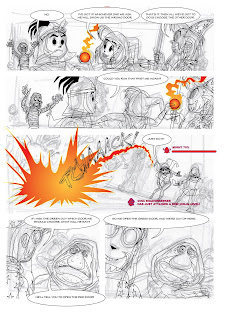 As you can see David's script works brilliantly in advancing the characters personalities as they try to fathom a way out of what could be a very long sojourn in the dungeon, but having been sad enough to waste countless hours playing this spooky and very addictive game in the early nineties, I was able to throw in a little bit of extra stress into the scenes involved by adding in some of the endless 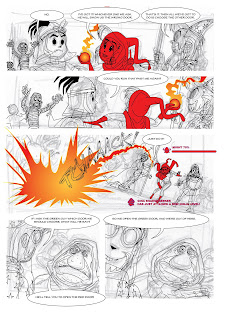 succession of monsters that assail unwary adventurers in these dark and dank corridors.

You can also see from these images the way that the line work
is built up and elements added as the page progresses. One of the very useful aspects of working these pages in Adobe Illustrator is that one can easily add or subtract bits of artwork without any deviation in the overall cohesiveness of the artwork. Which in terms of continuity makes the whole process a lot more seamless than might ordinarily be the case.
Posted by Peter Richardson at 08:19