Financial Ruin - The Key to Creativity!

The life of a freelance illustrator is on the whole very satisfying, you are after all being paid for doing what you like best, which is drawing and being generally creative. While the commuters are stuck on hideously cramped trains, heading to a no longer safe job in the office, stressing about sales targets, there you are still in your carpet slippers, cup of tea on your desk gently getting into another day of creating mind boggling artworks for which someone is actually prepared to pay you.

Nice work - if you can get it!

And there lies the rub, for no matter how busy you might be there is the inescapable truth that at some point the phone stops ringing. It always does no matter how many corners you as an illustrator might feel you have covered style and subject matter wise, sooner or later the dazzling array of jobs you were panicking over have disappeared and for every week no work comes in, the awful knowledge that you are slipping inelegantly towards skid row assails you - usually from 2.30 am onwards.

This awful and calamitous state of affairs is confounded by the knowledge that as your capital is being gently eroded come January you will have a huge tax bill to pay on the impressive earnings you accumulated a couple of years previously. It always happens like this - your dire year always falls when you have a tax bill the size of the Matterhorn (well in relative terms at least) to deal with.

This is precisely the scenario that occurred in January 2006, which in a way was the catalyst for David Orme (the author and premier spellcaster of much of The Cloud 109 mayhem) and I coming together. My work had reduced to a trickle and I had an alarming tax bill to pay and no prospect of any new clients. Usual scenario, which as an old friend of mine in the animation industry best summed up as, "when the going gets tough, the tough get going". 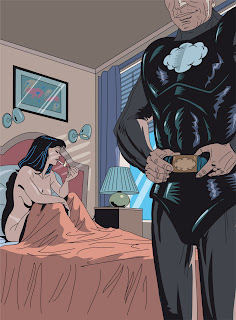 So what I did was to finally resolve the website I'd been titting around with for a few months, I didn't have any web building tools, but I had managed to create a viable site courtesy of an off the peg system run by Moonfruit at a total cost of about £50.00.

That was stage one, next having decided there was no way I could afford to buy any client lists, I started to Google search all available design studio databases and any other likely commissioners of illustration, so that I could send them customized emails. I would also as a matter of courtesy check out their websites to see whether my work was of any relevance to them or not and also to be able to offer praise and enthusiasm for some of the work they were engaged in - this kind of stuff is important and shows that you're not a total egomaniac who feels the world owes them a living but are connected to their requirements.

This approach worked like a treat and within a matter of a few weeks I had a string of really nice and different jobs coming in all of which were more creatively stimulating than many of the jobs I'd been working on previously.

The final stage of the relaunch campaign was to develop a new style, I'd stumbled over a Manga tutorial which came with an issue of Computer Arts magazine. The CD tutorial was one of the best introductions to the processes of working in Illustrator that I could have had. Using the lessons I learned I pretty much dispensed with Photoshop and threw myself totally into Illustrator. The results were promising and so at every possible opportunity it was the Illustrator route that I would adopt and before long I was mega busy again with more work than I could handle including the first of two series of books with David Orme.

The samples here are really from the early days of the development of the new look. The flying fish and "noir" detective type was for a design studio by name of Darkwater and the girl in bed cover (note the Herge influences) was for Frank Skinner's debut novel "Thunderman".
Posted by Peter Richardson at 07:33