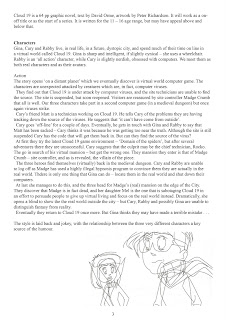 There is a huge revolution in publishing underway and where it's leading I'm not a hundred percent sure but here are some startling facts from the Society of Authors:

Children’s publishers cut acquisitions and advances
Children's publishers have cut their acquisitions by up to one third in response to the recession and a narrowing of range among the high street chains. Children's agent Elizabeth Roy said publishers were "delaying the books they are contracting; they are slower to commit to projects and slow to produce the contracts".
Macmillan Children's Books announced this summer that it would cut its list by more than a third, from 245 titles in 2009 to 155 titles in 2010. Hachette Children's Books has slimmed its list to focus on series and big brands, said MD Marlene Johnson.
Puffin MD Francesca Dow also confirmed that the company "will focus on making the big books bigger, and that will impact on other titles".
Publishers' cuts have come partly in response to the recession but also following changes in the high street. The collapse of distributor EUK has delayed business with supermarkets while the dominance of just one or two chains on the high street has led to a marked narrowing of range, said children's agent Caroline Walsh. "The concentration on bestsellers like Twilight or young fiction series like Horrid Henry means that other areas of publishing, including stand-alone young fiction titles, are neglected."
Backlist sales are falling too, with royalties down "across the board", said Walsh, as publishers resist reissuing backlist titles. Children's authors have also experienced a "significant" fall in their advances, she added. New projects that might once have attracted advances of £20,000 to £25,000 may now command only half that sum. Walsh has resisted attempts by some publishers to cut authors' advances by as much as 50%. She said: "Where authors have previously earned out their advances, there is no reason why they shouldn't earn what they have previously."
Agent Caroline Sheldon said it was becoming "tougher and tougher" for many children's authors to survive economically. "That's a worrying problem for the industry. In some cases [very well known] authors will be earning a secretarial income." www.thebookseller.co.uk 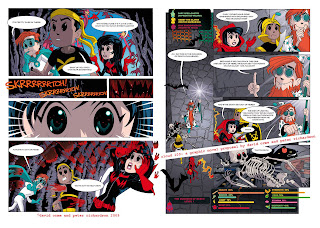 All gloom and doom - well not necessarily. I'm a great believer in the innate creativity of people and while the current trend in high street publishing is a rapid diminution of choice for those of us who loved to browse in bookstores, it does in a way create a vacuum for readers who are not just content with titles with TV tie ins or guaranteed best sellers. Self publishing is now no longer the preserve of the terminally deluded but is now via computers and the internet able to provide creators with the means of publishing to demand via resources such as Lulu.Com.

This is precisely the means by which David and myself put together our proposal booklet for Cloud 109. All page layouts were created via InDesign and then the pages were uploaded as Acrobat files to Lulu, where the book was then printed and bound. The books are printed to demand, with a relatively low unit price thereby obviating the need to splash out on a minimal print run for a book which is in essence a presentation as opposed to final product. We now have a bespoke brochure complete with glossy covers and colour lazer printing throughout which contains the entire script and synopsis for the first Cloud 109 book with 20 pages of artwork to show how the book will eventually look.

Whether or not there are any of the major publishers left with the kahonies to actually offer us a deal is a moot point but we are committed to the vision and determined to make this project a reality and self publishing is a reality for commited and creative spirits and we are firmly of the opinion that things are not as necessarily grim as last week's article in the bookseller would lead one to believe.
Posted by Peter Richardson at 08:30