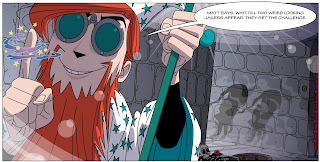 As I mentioned in yesterday's posting, the first lengthy games sequence that befalls, Gina, Cary and Rabby as they weave their way through the twists and turns of Cloud 109 is loosely based on a now relatively steam driven computer game which appeared over twenty years ago under the title of "Dungeon Master".

As this game has at least a vague Halloween theme, insofar as it's a definitely creepy in parts and full of monsters, I thought it might be fun to have a look at the thing in a little more detail.

Dungeon Master is one of those games that does have the ability to suck you in, the premise is relatively straightforward. You have to assemble a team of four adventurers with a mix of skills, so that ideally your team has a mix of spell casting and healing powers as well as fighting and dexterity skills, which are gradually enhanced as you journey through the at times labyrinthine levels to journey's end where you release the nice old guy at the end of the final level (there are 14 of them) from imprisonment by the Forces of Chaos.

All the characters have ridiculously portentous titles as if they have stepped out of Lord of the Rings and they are destined to encounter a veritable bestiary of nasty killer creatures which as their journey progresses, get ever more difficult to overcome. Added to which there are puzzles to solve, food and drink to find (your party will starve if you fail in this respect and some of the levels are very short on food), light to be created - those dungeons get very dark very quickly as your torch burns itself out. 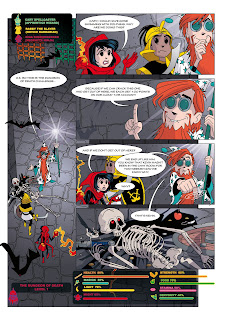 The game itself looks primeval in comparison to the kind of games you'll see on your PS3 or XBox, but what the hell - it's the atmosphere, the 3D sound of something nasty shifting restlessly as your team heads down a corridor with the light already failing and they're not quite sure which turning to take.

Highly addictive at least in the short run. 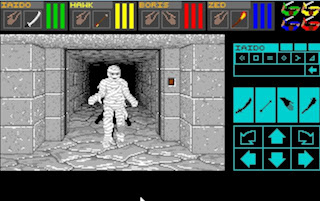 Christophe Fontanel has a website devoted to this game called "Dungeon Master Encyclopedia" and if you're as sad as I am, you can even download the game and it's sequels for free.

Something to try out over the weekend providing your Halloween hangover isn't wreaking more damage on you then the Forces of Chaos.
Posted by Peter Richardson at 08:35