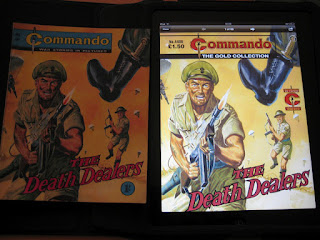 I am drowning in deadlines, too many to list but as is always the way with such affairs, it is sometimes good to momentarily climb off the hamster wheel and engage in an altogether different activity as a kind of catharsis. Hence I am back in blog mode.

In fact talking of wheels and hamsters, one of the deadlines involves working with a team of developers on a new app game and one of the characters that I have generated is this little guy.

Little cutie. Anyway the upshot of working with app developers is that I had to arm myself with an iPad and being as financially cautious as ever, I plumped for last year's model which is now just about affordable to someone of my modest means.

I must confess though that although I had not allowed myself to become too obsessed with having an iPad, now that I have one I can just see what an incredible leap forward in computing these things are, it's like looking at the next step in digital technology and in it's potential hints at things well beyond having a portable means of covering most of your computing needs in a phenomenally touch screen responsive format. 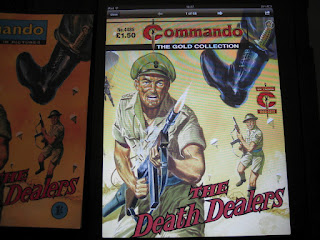 However, one of the first downloads I made was to the financial betterment of an auld and venerable establishment located in Dundee home of jam making and home to DC Thomson publisher of a myriad of newspapers and magazines such as the Beano, The Sunday Post, The People's Friend and also Commando. This lastly will be of considerable delight to my dear old chum Simon who with acidic sarcasm, recently berated me for not featuring Commando more prominently in my blog. 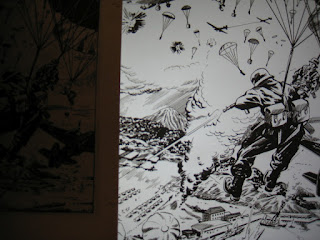 Anyway the reason for my shoving more money that I don't  have in their direction, was the delight of taking out a digital subscription to Commando (I have no shame Simon!). The delights of a digital subscription are manyfold but for anyone sharing living space with a woman of practical mind and an eye for minimalist interiors, the stress of having four issues of Commando comics arriving on a fortnightly basis with the unstoppable force of the Wehrmacht's invasion of Western Europe in Spring 1940 is too much to bear. 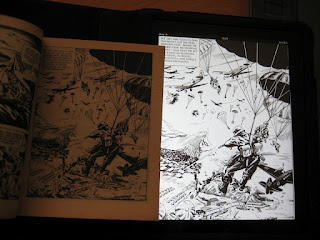 When you have an iPad all this is taken care of, there is absolutely no need to worry dear boy, the comics are ready for download as soon as you see them on the Commando website. They reside on your iPad awaiting your digital summons to be perused in razor sharp resolution and you are not having to squirrel them away underneath the sofa. OK so you don't get the tactile joy of flicking through the pages and the smell of the paper is gone, but the heady aroma of old newsprint is precisely that... OLD newsprint. It takes decades of careful storage to achieve, new Commandos are virtually a non event in terms of paper aromatics. 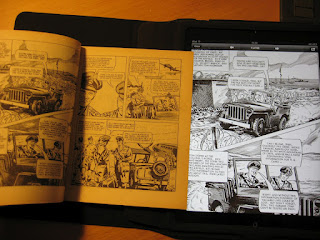 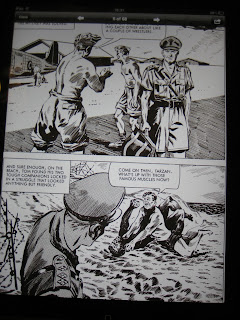 So imagine my delight when I discovered that yesterday there was yet another new batch of Commandos showcased on the Commando website, including yet another golden oldie which has never been reprinted before. Within what seemed nano seconds the reprint of Commando No 19, last seen on active service in March 1962, was on my iPad! The Death Dealers comes complete with another of Ken Barr's in your face covers, clenched teeth, buggin' eyes and Nazi dagger to the fore as the team of Tom, Dick and Harry take on the Fallschirmjager  descending on Crete. The script by retired Major Eric Hebden (who was a truly prolific writer of these 64 page comics for both Fleetway and DC Thomson) throws the trio up against the fiendish Leutnant Wolf Altmann who worries that if he fails in his quest he will doubtless find himself on zer Russian Front (a front which erm... actually didn't exist in May 1941. Zoon, zoon mein kamerad but not yet). Anyway that aside and the fact that the fall of Crete is somewhat marginalized by the derring do of Tom, Dick and Harry, the whole thing has a weird topicality as to a certain extent the Hellenic peoples are once again feeling more than a little aggrieved by the demands of their German neighbours.


However and returning to the iPad the most amazing aspect of Commando on the iPad is the quality of the art work, in this case you can see every line of artist Cecil Rigby's manic hatching and contra hatching creating the most diabolical symphony of pen work ever seen within the pages of a war comic. Rigby's work even at the time looked as if it came from another era and truth to tell it did. Like the much younger Gordon Livingstone, Rigby's work was devoid of any overt influence of the "Latin" school of war comics artistry. Rigby's work in contrast looked like that of a man who had followed a correspondence course in illustration. I well recall seeing one that my mother had followed and it was full of exercises of penmanship with the sort of cross hatchery that so distinguished the work of C.T. Rigby. Much of his formative work had been in the 1930's where he specialized in creating caricatures of sporting personalities and you could see the signs of it in the pages of this story particularly with the delightful portrait of Harry looking not unlike Joe Louis on page 59. That's where Rigby excelled but as regards placing his figures in a convincing environment, you can see that head and shoulders portraiture was really his comfort zone and straying beyond that was something he evidently found a chore. 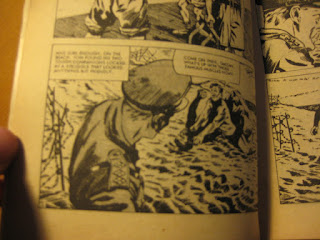 Nevertheless a really fun experience and definitely one to be recommended for anyone wishing to sample the early and very heady years of the UK's longest serving war comic.