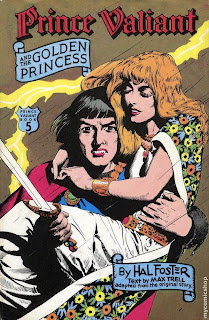 I remember my first sighting of Harold Foster's Prince Valiant. It was on the back of James Warren's Creepy magazine wherein amongst the various goodies that Warren's Captain Company were offering was seven volumes of Prince Valiant published by Hastings House. When a few months later I came across copies of the books in London's newly opened pioneering independent comic and fantasy shop Dark They Were and Golden Eyed, I was indeed impressed with the production values of the books which charted Valiant's adventures from his boyhood to ascendancy as fully fledged Prince, married to the lovely Aleta, who of course is a Princess - of the Misty Isles - no less.


The only thing wrong with these books was that they were presented in the guise of illustrated texts, rather than comic strips. So what you were looking at, beautiful and captivating as the images were, was a bastardized version of Foster's ground breaking strip - you were still not actually looking at the pages as Foster intended, rather you were looking at the pages that Hastings House thought would be more likely to gain the approval of librarians and teachers. The books had been in print since the 1950s in an era where even comics as respectable as Foster's Prince Valiant would have been regarded as unworthy of life between hard covers, so the imperative was evidently that Prince Valiant had to look like a proper illustrated book. 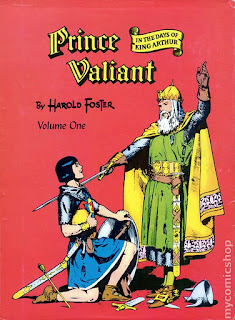 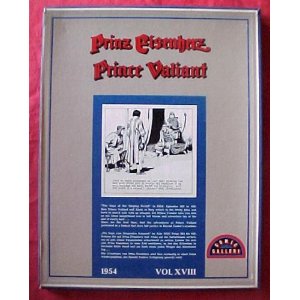 There was by the time (1972) that I was ferreting around in DTWAGE's new arrivals shelve, other incarnations of Foster's masterpiece, in the form of some French softback albums, but the repro on these was just appalling and Woody Gelman's recently published Nostalgia Press reprints of Valiant's early years were not much better, albeit both these publications being in color, whereas the Hastings House books were in black and white. 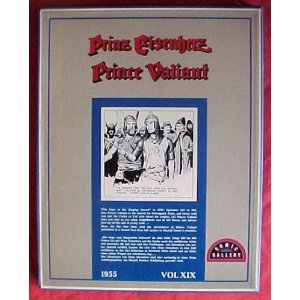 Something else was definitely required and it was sometime in the late 1970's that an Austrian publisher by name of Heinz Pollischansky published two handsome black and white folios of Prinz Eisenherz. The pages from each strip were housed in a smart looking box, with English text on the front pages and German on a smaller version printed on the reverse of each individual plate. The only slight problem was that the years in question 1954 and 1955 were not quite as captivating as the early years of the strips run, as by now Prince Valiant having plighed his troth with the lovely Aleta was turning into a medieval Dagwood to Aleta's Blondie. In the process much of the dark fantasy which had so characterized the early years of the strip had been lost. More volumes followed in book format but frustratingly they continued on the run from the 1950's, although tantalisingly the first two years of the strips run were also included. 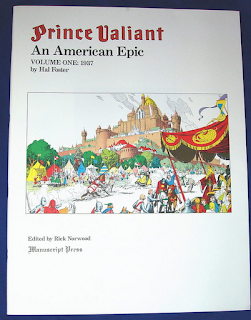 But this wasn't the end of the quest for a format that would accord full justice to Foster's swashbuckler. Nope, just as you were clearing shelf room for Pollischansky's reprints, along comes Rick Norwood, who with admirable dedication to the cause set out to source his prints directly from  Foster's original artwork, or failing that high quality proofs so that each year's Valiants would be the optimal best that any enthusiast could hope for. The first volume appeared in 1984 and was truly impressive, however there were a few caveats. The first was the sheer size, Norwood had decided to publish the books the same size as the original Sunday Comic pages, the dimensions of which were so huge that it made extraordinary demands on storage of the books. Forget about clearing shelf space, there seemed no other solution beyond clearing a drawer in an artist's plan chest, and this coupled with the fact that to keep
his soaring costs down each volume was paperbound dictated that even reading the thing was an event that required a certain amount of pre-planning. 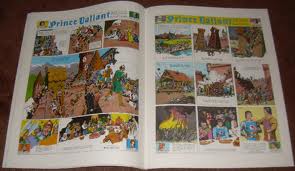 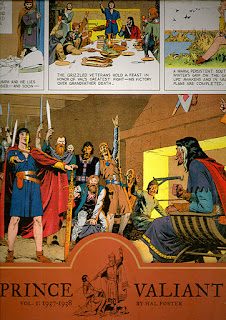 However the thing that eventually saw this project run out of steam was the cost of the color separations. Each volume of Norwood's Manuscript Press Edition Prince Valiant's was sourced from optimal quality black and white artwork and then using the pages of the original Sunday Comics as guides, new color separations were created. The cost of this part of the procedure, coupled with his already soaring printing costs and the need to sell enough of each highly priced edition to justify producing a new volume, dragged out the project to the point that only the most dedicated made it to volume three. A very limited edition of 26 copies was produced which contained all three volumes bound together as a way of writing a finis to the project.

Meanwhile an up and coming publisher by name of Fantagraphics Books was publishing the whole series of Prince Valiant in a much more affordable soft cover format. However as regards this reviewer at least I would have much rather spent a fortune on Norwood's epic enterprise than ploughed money into acquiring a set of books that didn't look that much better than a lot of other European editions that were also in print. 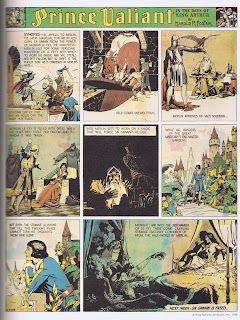 So for years my Manuscript editions remained my arbiter of what should be achieved with a reprint of Prince Valiant. That was until a year ago when I received a phone call from my main man in the comics 'hood Mr Geoff West, Chief Svengali and Master of the Universe otherwise known as The Book Palace. In the course of said call he mentioned that he had just taken a delivery of the new edition of Fantagraphics Prince Valiant.


"Yes Geoff, but is it as good as the Manuscript Press editions"?

And you know what? 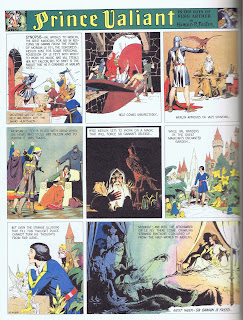 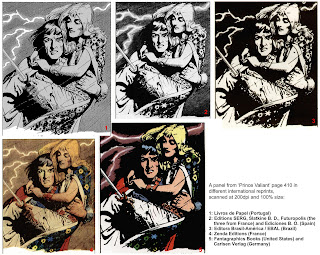 Check out this link for more information. Volume four covering the years 1943-1944 has just been published.

I am also including a sample from Valiant's first meeting with Morgana Le Fey to show a bit more of what Fantagraphics have achieved with this series. The first sample is from The Smithsonian Collection of Newspaper Strips and as you can see was shot from a Sunday Comics section with the curse of all comic restorers (I should know after working on The Wulf the Briton project) see through from the strip printed on the reverse side showing through loud and clear. Whereas the Fantagraphics page is scanned from Hal Foster's collection of proofs and what a difference this makes!

For lovers of Foster's unadulterated black and white line work it's also worth mentioning a fabulous Portugese edition of Prince Valiant by publisher Manuel Caldas. Only the first year 1937 has been published in English, but many more years are available in Spanish. Again check out this link for more information and the page above again shows the high fidelity of this edition's repro in comparison to previous efforts.
Posted by Peter Richardson at 10:04