Light and Shade and the Genius of Gustave Dore 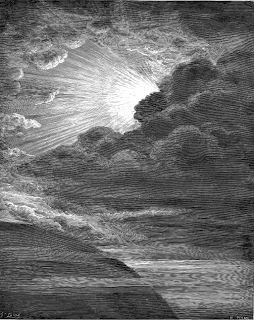 Having made mention on more than one occasion on this blog of the importance of light and shade and the huge influence it had on the work of Denis McLoughlin, makes me think of the world of nineteenth century illustration and the work of Gustave Dore.

Dore was without doubt one of those very rare phenomena, a child prodigy, at the age of five his drawing displayed a maturity and finesse well beyond his years. Such was his fascination and drive to exploit the opportunities that the expansion and development of printing and publishing afforded artists to share their visions with a mass audience that by the age of twelve he was carving his own lithographic stones. 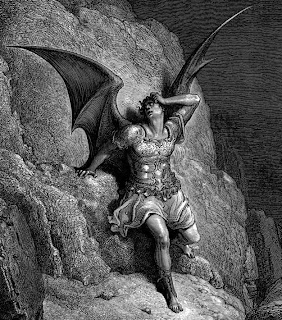 His bewildered but indulgent parents thought that at the very least they should broaden the boy's horizons by showing him some of the great galleries, so in 1847 at the age of fifteen Gustave accompanied his parents on a visit to Paris. Needless to say the boy immediately fell in love with the city and not only imbibed the contents of all the galleries, but browsed through all the bookshops and sought out the publishers that were producing all the books and journals which so enchanted him.

As Gustave wandered hither and yon he discovered the premises of the publisher Charles Philipon and viewed in their windows with particular interest a set of engravings that Philipon had recently commissioned. The following morning instead of accompanying his parents, he feigned illness and they left him at the lodgings as they set out for another day's explorations. As soon as they had departed the boy got out his pencils and drawing paper and set about creating his own distinctive response to the Philipon brief. Once he had completed the drawings to his own satisfaction he set off for Philipon's shop, where with his folio tucked under his arm he insisted on being ushered into the presence of the publisher, who although bemused was somewhat charmed by the diminutive lad's forthrightness and granted him an audience. 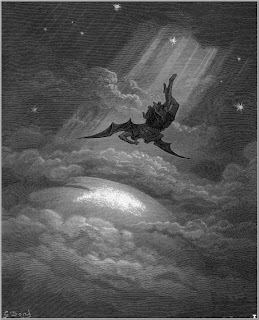 Dore whose precocity was matched by his confidence then proceeded to give Philipon the hard sell, and declared that not only were the engravings on display a little lackluster, but went on to insist that he, Gustave Dore could do a much better job and with a flourish laid his folio on the desk and proceeded to show Philipon how the illustrations should look. It was at this point that the career of Gustave Dore took off and with it the course of Western illustration was set. He didn't return to Strasbourg instead with his parent's consent he signed a lucrative contract with Philipon and by the age of 16 was the highest paid illustrator in France. 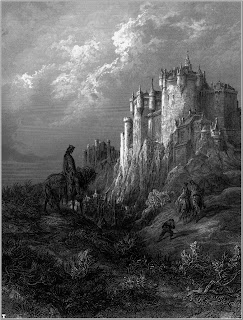 By 1854 he had produced a series of literary art books on the writings of Rabelais and Balzac and was working with France's biggest publisher Hachette. It was at this point in his career that he decided he wanted to produce the ultimate art book and proposed to Louis Hachette that they publish a folio on Dante's Inferno. The idea was attractive to Hachette but the costings were daunting, the book would need to retail at a 100 Francs and the highest price that Dore books had sold for was 15 francs in what was considered the luxury end of the market (to contextualize the minimum wage was 550 francs per annum and a lot of families would get by on about 1200-1500 francs per year - womens wages being half those of male workers). Needless to say Louis Hachette got cold feet but when Dore insisted, saying that he would pay for the whole enterprise, essentially reducing Hachette's role to printer rather than publisher, Hachette assented but advised Dore only to print 100 copies rather than waste money on binding books which would never be sold. 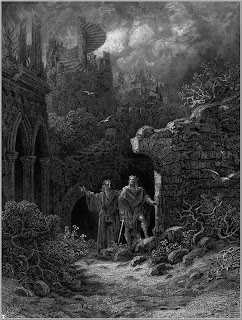 When the book was eventually published in 1861 with 70 of Dore's haunting and powerful visions of Hell and Damnation the reaction was unprecedented. Summoned by a telegram from his publisher which has now achieved it's own legendary status; "Success, come quickly! I am an ass!" Dore's reputation became international.

Here is a selection of his amazing artistry, including some of the plates from Dante's Inferno, illustrations to Tennyson's Idylls of the King, Milton's Paradise Lost and the tragic expedition to the summit of the Matterhorn. In all these you become aware of the power and  majesty of nature in a world where light mattered. It mattered because it was so temporal. Dore's work is suffused with encroaching night informed by a world where the best that people could aspire to in terms of artificial light was the hideous green of gas lighting or the guttering candle that ebbed and flowed with every little draft of air and where intimations of mortality came hard on the heels of evening shadows. 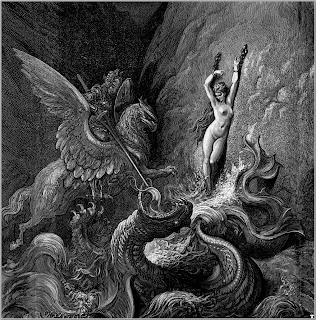 It gives Dore's work a power that illustrators working in a world cosseted by light at the click of a switch can never really recapture. 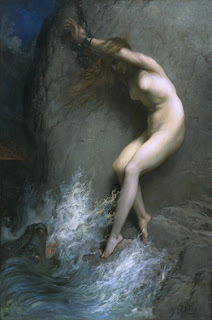 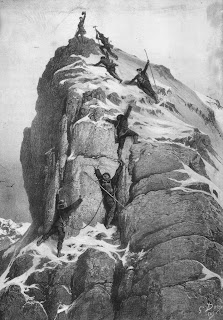 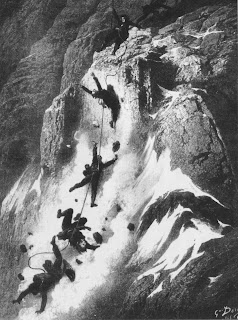 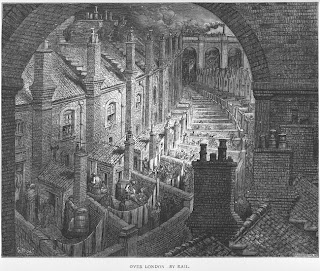 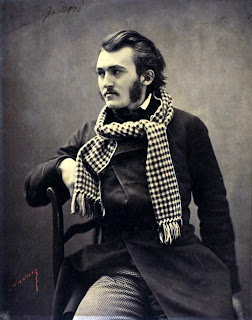 Posted by Peter Richardson at 21:33