Commando Takes Another Trip Through The Vortex of Time 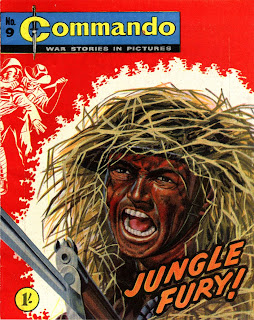 I've just received the following update from Commando's editor Calum Laird as the UK's longest running war pocket library continues to celebrate it's 50th birthday by reprinting some of it's oldest and earliest titles.

Rather bizarrely they are reprinting the first twelve issues in reverse order, so this week we are at issue 9, which has a truly in your face cover by Ken Barr, who also designed the Commando banner and painted the Sykes Fairburn stiletto dagger, in a manner that indicated he was more than au-fait with what the thing looked like. Barr had in fact seen service in the Middle East and as a tough and pugnacious Scot was not a man to be trifled with. He was in fact not  a million miles away from the kind of characters he portrayed on the Commando covers, covers that burned their way into the subconscious of many a schoolboy in the early nineteen sixties. 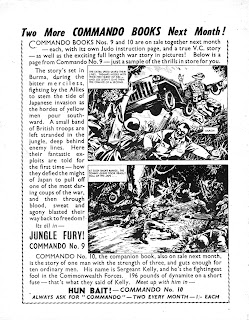 As I've mentioned earlier on this blog, Commando was somewhat of an anachronism in contrast to Fleetway's war libraries and all the other knock-offs that rode on the coat tails of War, Air Ace and Battle Picture Library. The first two issues of Commando really sold on the strength of their covers, the interiors were illustrated by second banana European artists and were pretty lacklustre efforts in comparison to the contents of the Fleetway titles. It was Barr's covers and the inventiveness of his panoramic layouts which extended around the back of each comic that made the things stand out.

That and the fact that Barr's paintings embodied the cult of the individual against the system. To emphasize the point the lead characters on issues 1 and 2 appeared bare headed, with rippling musculature bursting out of shredded khaki, a style statement which owed more to U.S. style pulp men's mags than it did British Army dress code circa 1942.

It cannot be over emphasized just how vital Barr's covers were in getting editor Chick Checkley's brainchild into the hands of schoolboys, for at times the art within those early issues lacked the panache of the Fleetway product or as in the case of two artists destined to be stalwarts of the title,  was in the process of finding it's feet. 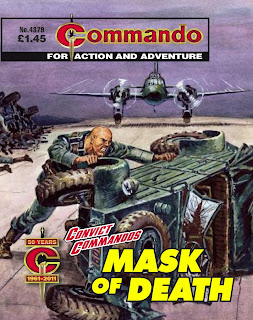 In the case of Gordon Livingstone, who debuted in issue 4 of the series, he confessed that he was entirely oblivious of war pocket libraries,  his style evolved as a response to meeting Checkley's deadlines in as entertaining and engaging a manner as possible. This phenomenon of artists unencumbered by stylistic conventions was even more pronounced in the case of the artist whose work you will see within the pages of issue 9.


Jungle Fury sees the second appearance of the densely hatched and cross hatched work of artist C.T. Rigby who at the time he embarked on his long running stint for Commando was already relatively long in the tooth. His work much like Livingstone's was just so different that it really obliged you to engage with the stories in a way that  took a little getting used to. Rigby who conducted his work through the mail (unlike Gordon Livingstone who at least started as a studio draftsman) had been working for Thomson titles such as Star Love Story. His other work included political and sports caricatures and clay sculptures of the Manchester United Football team. 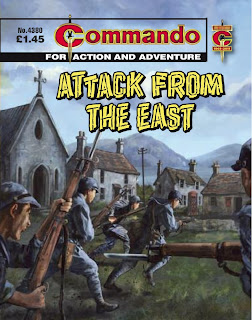 Here then is the gallery of those forthcoming titles plus the original cover to Jungle Fury and a sample of Rigby artwork from the same story. 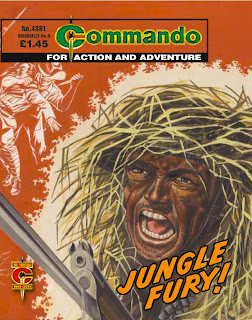 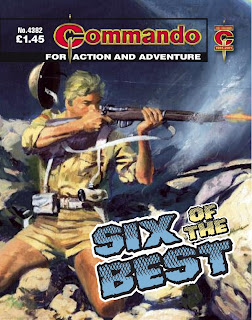 The Convict Commandos — Jelly Jakes, Smiler Dawson, Titch Mooney — and their leader Guy Tenby are back in action. This time they are planning to snatch a scientist from under the noses of the Nazis in occupied Europe.
It’s no easy job and, with treachery afoot, the prison sentences they’re trying to avoid begin to look a very tempting alternative.

The second adventure for the latest band of Commando heroes.

Most people would think that nothing much happened in the peaceful village of Helmsbeath, situated on a remote island on Scotland’s North West coast. And most people would have been right to think that…until the fateful day in late 1944 when Helmsbeath was invaded. Invaded by the armed and dangerous crew of a Japanese C3 submarine and the crazed Nazi scientist who was with them!
Would the villagers survive…ATTACK FROM THE EAST?

What hits you most about this story is the cover. Ken Barr’s image leaps clean off the page and you can almost hear that soldier screaming blue murder. Inside the story is of a jungle trek involving an elephant and train. It shouldn’t work, but it does picking up pace throughout.
Artist Cecil Rigby was a Commando regular from 1961 until No 3272 in late 1999 — a total of around 150 books — and he well captures the atmosphere of the jungle and the fury in this one.


In the steaming jungles of Burma, man has a thousand enemies…the wild animals, the snakes and poisonous insects, the deadly fevers. But the fighting British jungle patrols had an enemy more deadly that any of these…the creeping Japanese soldiers who could appear from nowhere and sow the lead seeds of death before melting again into the waiting green background.
But Sergeant Tom Flynn had his own way of silencing the Banzai cries of those Sons of Nippon.
With a handful of men and a heart full of courage he fought his way through them — and with him he brought a strange prize…ten million pounds in solid gold.

There are many types of hero but, in my opinion, the most interesting kind is the unlikely hero — the underdog. And, as you may have guessed from the title, in this brilliant tale you get six for the price of one (which, back in 1980 was a mere 12p — even at today’s prices we reckon we’re still good value).
So please join me in rooting for half-a-dozen ordinary (if admittedly a bit useless) blokes, left behind as a desert rearguard, determined to prove that they’ve got what it takes to be the best…


Six men — five private soldiers who couldn’t do a thing right and a brand-new Second Lieutenant who had never been in action. Left behind as a rearguard just in case the Jerries showed up, they landed in a hotter spot than anyone had bargained for — and became the most unlikely heroes of the Second World War!