Work In Progress - The Wonders of Illustrator! Part 3 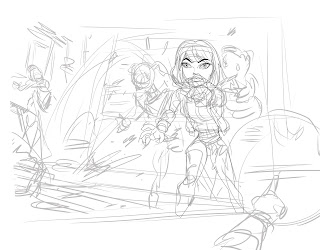 I'm fascinated with the idea of posting occasional work in progress reports on the job that I am currently involved in as it has some interesting challenges, not the least of which is that the writing which underpins this series of stories is so unresolved that it places the illustrator in the position of being obliged to make some visual compensation for the holes in the plotting.

As mentioned earlier the stories are aimed at 15 - 16 year old slow readers and to a certain extent there is a slight feel of writing down to this audience in these scripts. The text is deliberately kept simple, but the team I am working with are a delight and are so far (fingers crossed) receptive to the idea of making these books as attractive as possible to teenagers, who aside from their reading impediments are otherwise like all other teenagers in a state of having their brains re-wired while their hormones are coursing through their veins like the lava flows of Mount Etna. 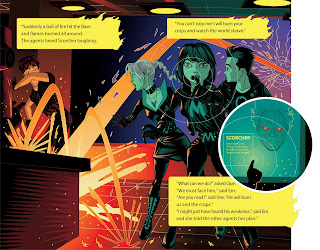 So I've sold the idea of Manga Goth (toes crossed and fingers crossed). But there are lots of glicky bits with the text. In the first book we have a pyro maniac super villain by name of Scorcher and in a matter of a few spreads he comes and sets fire to the teams crops. They ... erm live in a secret base in the desert, where they ... ermmmmm ... protect the world from super villains and grow crops - of course!

So in one scene we have them checking the touch screen computer to check on who's coming for them this time ... Scorcher - of course!!! Next scene they're rushing out to see what that naughty old Scorcher is up to and By George!!! He's setting fire to their crops. Next scene, he's setting fire to one of the heroes (that's the scene previously posted with an urban backdrop - done as a sample before I had the full brief, hence the continuity lurch).

Then comes the headache scene - suddenly they have a water cannon which they're aiming at their chum to douse her before turning the cannon on Scorcher, whose face begins to burn with the effects of the water before he flies off (God help us - I'm going to have to talk them around to a slightly better super villain exit as well). 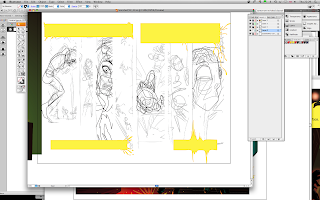 There is a golden rule in all story telling that if you are going to have any kind of device that the plot hinges on you need to plant it in the reader's/ viewer's mind before you actually use it. Water cannons don't suddenly appear out of thin air, there has to be some logical reason why such a device would be accessible.

Problem fairly simply solved as each story commences with an aerial view of the team's base. The author's directions for what needs to be there are merely restricted to a few items that appear in the books. So we get the base with it's flat roof and observation tower, plus disused mine shaft, plus crops.

No mention of  necessities such as a generator, grain silo, sheds with farm equipment or the most obvious requirement of the lot  - a water tank and ...

Here's the previous artwork now completed, plus the problematic spread which I am happily breaking up into comic panels as two images on this one just won't work.
Posted by Peter Richardson at 23:07