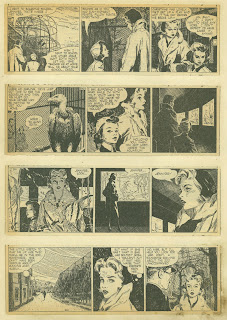 I blogged several months ago about an exquisite and long forgotten newspaper strip that adroitly captured the sophisticated milieu of post war London via the fraught relationships of it's central character and namesake; Carol Day. "Carol Day" was as you will recall the brainchild of the artist David Wright, who had left school and commenced work at his uncle's studio, where his talent soon manifested itself and following on from being a very successful fashion illustrator he soon started veering in the direction of comic strips such as "Judy" which appeared in the popular weekly magazine, Tit Bits". "Carol Day" which first started appearing in the Daily Mail in 1956 proved the most popular of all Wright's strips as well as being his best realized, the quality of both his scripting and his artwork were without peer, it is really a great shame that the majority of comics enthusiasts are still unaware of it and comic historians should hang their heads in shame. There is Roger Clark's excellent website devoted to David Wright and Carol Day at http://carol-day.com and both Steve Holland and David Roach have written some excellent pieces on this subject along with artist Brian Bolland who has always had high regard for Wright's work. 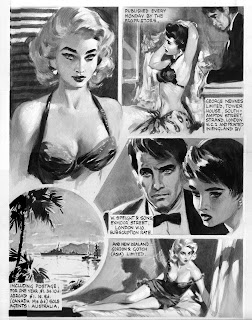 The artistic tradition in the Wright family is a strong one, as aside from David Wright's uncle the family could trace their artistic heritage back to Joseph Wright of Derby fame and all of David Wright's three sons pursued careers in the arts, with Patrick Wright achieving notoriety as the artist behind Battle Picture Weekly's "Hellman of Hammer Force" as well as various issues of Commando pocket library, while his younger brother Paul became a noted maritime artist with scores of paperback covers to his credit.

Their eldest brother Nicky who was the original model for Mark Lovell (brother to Carol Day's flatmate Nora) eschewed pencils and paints and turned instead to the camera. After a disastrous start as a wedding photographer, where on one memorable occasion and unable to break the bad news to his client, the father of the bride tracked the otherwise incommunicado photographer to the shed at the bottom of the garden which served as Nicky's developing studio singing in a stentorian voice, "Someday My Prin(ts) Will Come".

Nicky quickly realized that he needed to get a bit more training under his belt and able to charm his way into any circles he fancied, managed to blag himself an apprenticeship to Dezo Hoffman who was a London based photographer of Slovak origins who had entree into all the right circles. Hoffman was also beginning to get himself a reputation as a photographer of up and coming bands. Young Nicky was sent along to meet some of the bands that Hoffman was being called upon to photograph. He met the Beatles but didn't really find them that captivating, the next band was an entirely different matter when Wright was sent to meet The Rolling Stones and their street savvy manager Andrew Loog Oldham, who having barely turned twenty was the youngest yet most clued up, member of the team. 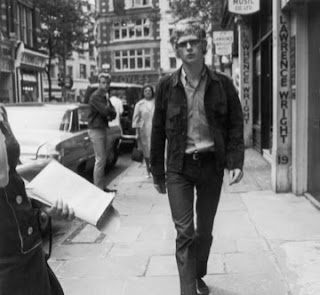 For Nicky it was love at first sight and while Dezo concentrated his lens on the fab four, Nicky's attentions were chiefly orientated towards the Stones and following a succession of photo calls it was soon time to create the cover image that would launch their first LP - and all for the princely sum of £25.00. A big deal job indeed, which called for a bit of extra thought on Nicky's part.

It so happened that Nicky was renting a ground floor room from the actor Tom Bell whose role as Toby in the "L-Shaped Room" had attracted a lot of critical acclaim and Bell's lovely missus whose seductive charms did not go unnoticed by the young Wright was his de-facto landlady. An additional delight for the photographer's eye was the truly gargantuan and very grand fireplace that his room hosted and it was here that Nicky decided to place the Stones. 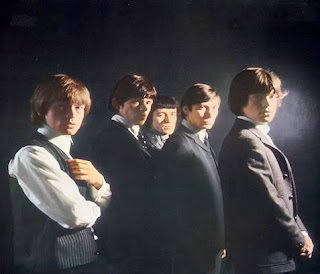 The resulting photograph was truly sublime, with the softly lit, almost Gainsboroughesque pose adding a degree of gravitas to a band that represented every parents worst nightmare. Frequently and totally erroneously attributed to David Bailey (who created an equally stunning image for their second LP) this remains one of those iconic frozen moments in rock history.
Posted by Peter Richardson at 12:02