Russ Jones, Woody and the Genesis of Creepy Part 3 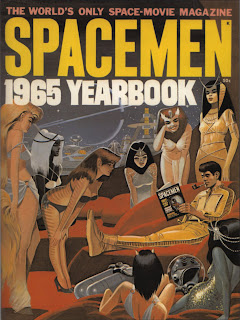 Jones having met up with Warren felt considerably heartened, here was a man he could definitely do business with and in addition to the Famous Monsters cover he'd picked up there was a cover for the Spacemen Year Book, to be ultimately shared between Woody and Jones and several other commissions including a larger project Jones needed to discuss with Wood. 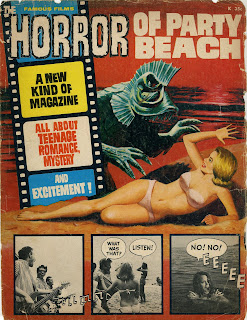 In fact the project was sufficient in itself to warrant another meeting, this time with Wallace Wood in attendance, at Warren's well appointed penthouse on the 14th floor of  the Embassy House on New York's East 47th Street. There in Warren's impressive reception room, the project was outlined to Jones and the ever skeptical Wood. In this case Woody had every right to be skeptical and as events turned out, his caution was more than justified. What Warren wanted was a magazine that followed up on the success of his biggest selling title to date, "Famous Monsters of Filmland". In Europe "fumetti" were all the rage. These were comics aimed at a teen market and created by using photos rather than drawings . In those far away days at  least a possible next big thing. 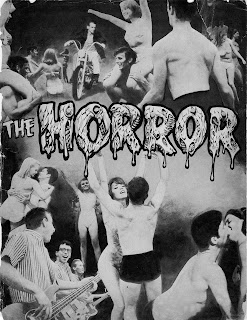 The brief to Wood and Jones was simple. what Warren wanted was 64 pages of "fumetti style" artwork sourced from stills and film stock of a film recently released called, "Horror of Beach Party". To Warren this seemed like a sure fire bet, the film had all the right ingredients to excite the interest of that hitherto unfathomable section of society otherwise known as the teenager. Sun, surf, sex (well at least a hint of it, we are talking 1964 for Pete's sake!), twangy guitars, teenage gangs and oh yes! monsters!!! I mean how could you go wrong with a combination like that? 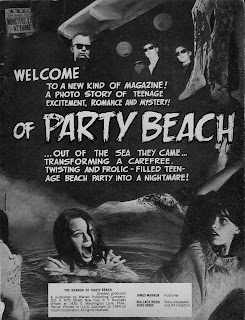 The budget for the entire project was something like $550.00, including $200.00 for the cover, this at a time when top rate was  $30-35 a page and even Charlton (the graveyard of many an artist's hopes for a relatively comfortable career) were paying $20.00 a page. But then of course there was no real drawing required, just the ability to create punchy page layouts, bung in word balloons, and then there was the lettering, possibly a bit of re-touching here and there and perhaps freeze framing and photographing the results to create new images to bridge the inevitable gaps in the relatively small number of production stills. A piece of piss really...

Wiser counsels would have politely declined the job, or haggled more vigorously over the budget but with their eye on bigger things from Warren in the future, Jones with Wood's less than effusive concordance, sealed the deal. 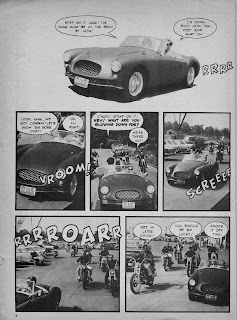 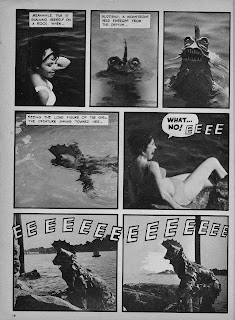 It wasn't until they'd met up with Del Tenney the director and producer and attended a screening of  the cinematic abomination a.k.a. "Horror of Beach Party" that they realized just how bad this thing was. But needs must and so they got on with the job, fortified by gallons of coffee and bacon sandwiches served up to them by the lovely Tatjana Wood, whilst Woody fulminated about the vicissitudes of working for exploitative publishers, especially James Warren who he now referred to as "suction head". As the work progressed Woody became increasingly frustrated by the amount of re-touching involved, especially with the creature's teeth, which to the nicotine fixated Wood looked more like a row of cigars. In a moment of desperation and in spite of the truly miserable budget Woody invested in an air brush, which true to form failed to work. They even ended up having to take extra polaroids to help flesh out the story (such as it was) with Wood cast in the role of a world weary  (this came naturally to Wood) news announcer and Russ Jones as R.J. your all night D.J. making a cameo appearance. 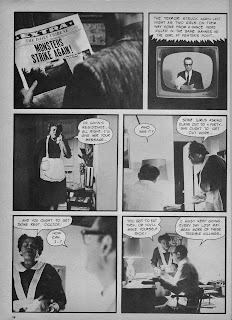 By the time the story was delivered to Warren, Woody wanted nothing more to do with the publisher, but there was one job that he and Jones had squeezed in for Warren, which was destined to be a key component in the birth of Warren's black and white horror comics.

P.S. For those of you who want to check out more of the great Woody's fantastical work whizz yourselves over to BookSteve's incredible blog; "Hooray for Wally Wood!". 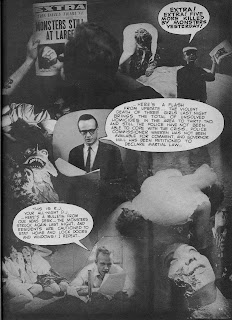 Posted by Peter Richardson at 10:12