Russ Jones, Woody and the Genesis of Creepy Part 5 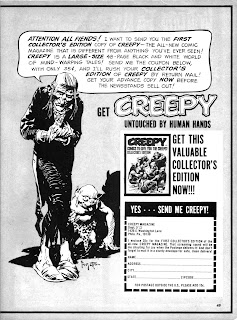 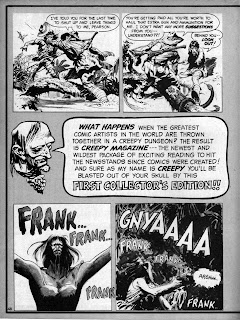 Now as you will recall from previous postings Woody had stepped back from any further professional involvement with James Warren , partly as amongst all his other work, he had to rack out a major project creating a new line of superhero comics for an outfit by name of Tower Comics. Phone calls were going out from Wood H.Q. located at East 74th Street - up five flights of stair and no elevator! Russ Jones empty chair was now occupied by another young ex serviceman with a lot of drive and a love of comics - Dan Adkins.

Adkins, who along with friend and fellow fanzine contributor Bill Pearson had moved to New York several years earlier, was by this time well into the network of aspirant young creatives who were hungrily seeking to further their careers in the comics industry. A key player amongst these young turks was Larry Ivie, whose apartment located in the down at heel Chelsea neighborhood, became a default crash pad for many of the aspirant artists. Ivie who had recently graduated from the New York School of Visual Arts was one of a group of artists who regularly attended a privately run Saturday life drawing class which included such luminaries as Al Williamson, Roy Krenkel and a young man by name of Archie Goodwin. Angelo Torres and Frank Frazetta would also occasionally put in an appearance inviting the whole troupe over to Central Park for a game of baseball afterwards.

Ivie you may recall had aroused the ire of Woody when instead of merely ruling in panel borders on a Captain America story, had actually redrawn the Cap and Bucky in their Golden Age costumes and returned the inked pages to the Wood studio as he felt that the current Marvel version was somewhat inferior to it's Timely predecessor. Ivie's missionary zeal didn't just stop there, he would regularly petition editors with analysis of where he thought they were failing their readers, he would even go so far as to spotlight artist's swipes in one instance devoting a slide show at one of New York's sci-fi conventions to the art of the swipe, starting with Adkins, through Virgil Finlay, through to The Saturday Evening Post, etc, etc and ad infinitum. 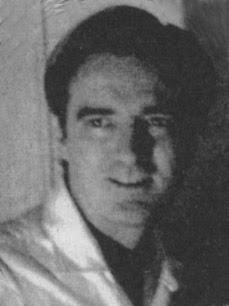 The ever industrious Ivie managed to get himself onto Russ Jones' radar at about the time Warren had finally assented to Jones idea for a black and white horror comic. Now sourcing artists (and in Jones mind artists with the right sort of EC provenance) became a priority. Woody was again canvassed but the answer was still no and besides Woody was snowed under. Nevertheless Jones had Woody's old colleague Joe Orlando (who'd helped put together some of the black and white horror movie adaptations they'd recently created for Warren) set up with a desk at Jones spacious apartment at the Clifton. Ivie, who was as enthused about the project as anyone could be, helped spread the word and with the enthusiastic endorsement of Al Williamson, who was with typical generosity doing all he could to further the career of the young Ivie, a gathering of artists was beginning to assemble itself around what was being  referred to as "Project D". 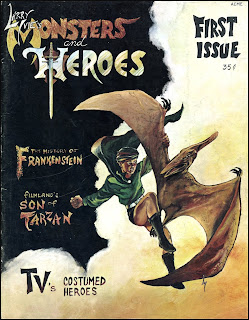 Jones was initially tasked with the brief of putting together a 64 page comic including of course Warren's Captain Company adverts (which was a vital part of the funding of Warren's magazine empire it has to be noted). The magazine was ultimately shrunk to 48 pages but as far as Jones was concerned he had a lot of work to pull in over a relatively short period. The network of artists that Jones had met, many via Al Williamson along with a pool of young writers including Ivie himself and many of the regular faces at Ivie's apartment such as Bill Pearson and Archie Goodwin were beginning to coalesce around the project. 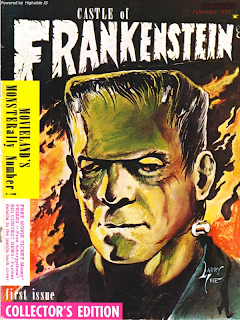 The project that still had no name. According to Jones, it was late one evening as he was mulling over old EC tearsheets that the phone rang and a very irate James Warren called wondering why this magazine still had no title. Jones had been distractedly looking at the work of Graham Ingles.  Jones would have dearly loved to secure Ingles artistry for the project but at the time the maestro of gothic decay and dissolution was rumored to be somewhere in the Florida swamps, having walked out on wife and family some two years previously. Ingles was therefore as publicity shy as a man in that position could reasonably be expected to be. The page that Jones was  fondly looking at was a classic Ingles rendition of the Old Witch and featured in one of the speech balloons was the word "Creepy". Thus was a publisher placated and thus was a legend born.

Part 6 of this epic saga tomorrow  - all this from a posting that was originally going to be devoted to an unusual Wallace Wood Creepy tale - you see how truly serendipitous this blog really is!!! 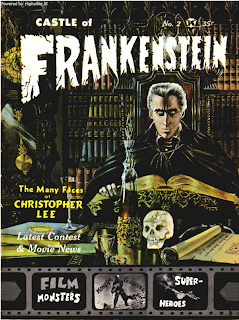 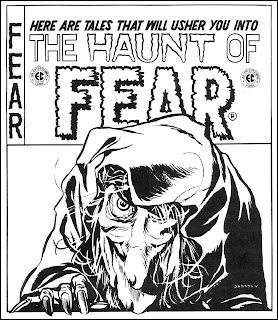 Artworks included today include Ivie covers  from Larry Ivie's very own " Monsters and Heroes" and his time as editor of "Castle of Frankenstein" a magazine that drew much inspiration from a certain Mr James Warren's "Famous Monsters of Filmland".

Posted by Peter Richardson at 10:35