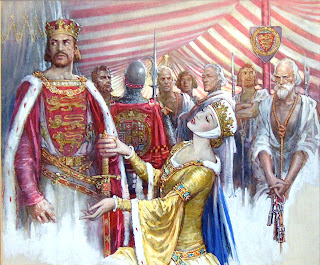 John Millar Watt, was as many of you will be aware, one of the many talents who helped add an artistic flourish to Leonard Matthews Look and Learn magazine  when the UK's children's educational weekly was first launched in 1962.

By this stage of his career Millar Watt was heading towards his seventies, but his artwork remained as beguiling as ever. His paintings were fashioned with an almost ethereal, jewel-like application of paint and ink to finely rendered figure-work. The overall effect was often quite haunting and at times just a little unsettling, they were images which remained with the viewer long after the magazine had been set aside. 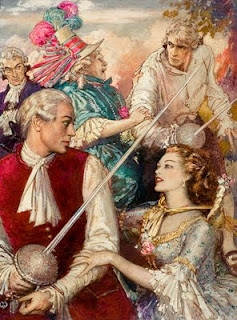 Millar Watt, was typical of men of that generation insomuch as he had seen a lot of life, having had his art studies interrupted by the Great War, where he appropriately enough served in the Artist's Rifles. Upon returning to civvy street he pursued a successful career in illustration, until in 1921 he almost serendipitously created a comic strip that was to prove such a hit with audiences both at home and in the U.S. that he became enslaved to the life of "Pop" and his family.

Yo can check out some samples of "Pop" on John Adcock's excellent Yesterday's Papers blog.

Watt became shackled to the world of Pop for 28 years before finally giving the old boy his curtain call, by which time he was positively champing at the bit. The year was 1949 and a meeting with Leonard Matthews was to provide the artist with more than enough work to fill the rotund void left by the departed Pop.

Here's some of the work he created for Look and Learn.