Tales of Pirates and Outlaws

Yesterday's post which looked at Mervyn Peake's amazing illustrations for Treasure Island, did mention in passing the work of N.C. Wyeth who had also illustrated Stevenson's text some thirty plus years earlier. 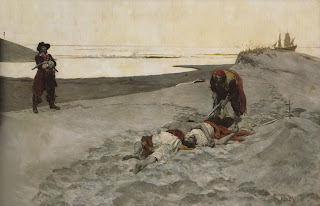 Wyeth's illustrations are in a very different vein to Peake's and really it is pointless to even speculate as to which are the strongest. Peake's works are very dark and brooding and emphasize the almost visceral terror of finding yourself as a nine year old boy having to overcome the perils of the very threatening environment that surrounds you. When 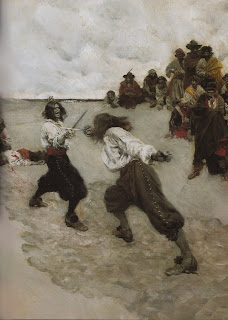 you look at Peake's illustrations you are seeing the world through the eyes of Jim Hawkins - hence the atavistic sense of terror that suffuses these great works. 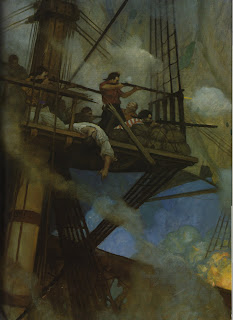 Wyeth's approach which was entirely in keeping with the expectations of the audience he was communicating with is entirely different. Here the world of Treasure Island is presented as spectacle on a grand scale. These illustrations you are viewing as an onlooker rather than a terrified participant. Wyeth who was working during a revolution in print technology was able to see his paintings reproduced via the huge breakthrough in colour lithography which in effect liberated illustrators from the misery of having to have their 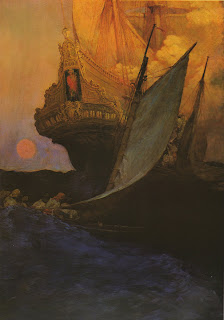 work re-interpreted by engravers and presented as an approximation of the original artist's intent in black and white.

The development of cheap and accurate colour lithography created new opportunities for publishers and the resultant expansion of affordable books and mass circulation magazines meant that the career prospects of talented artists such as Wyeth were very promising indeed.

Not that illustration was as accessible a career option as it later became. One of the pioneers of 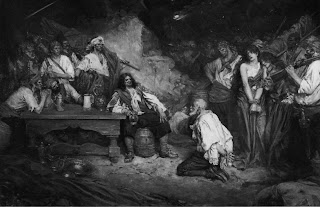 the school of heroic fantasy illustration that was to provide such a powerful inspirational touchstone for Wyeth was Howard Pyle. Pyle was of the previous generation of illustrators 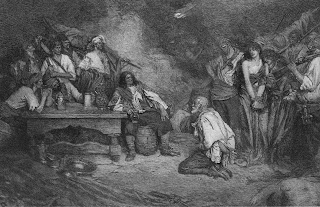 whose work had literally been liberated from the confines of monochrome engraving and Pyle it was who was destined to become Wyeth's mentor and champion when the older man invited him to join the alumni of his recently opened school of illustration in Wilmington Delaware. 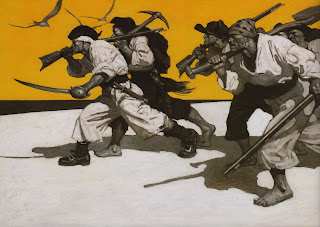 Few were chosen to attend this most prestigious of institutes, all the artists who studied there went on to become successes in their own right but out of all the people who studied there N.C. Wyeth seemed to be the most favored of them all, his work being frequently singled out for praise by the ever demanding Pyle. Stylistically he was perhaps the closest to the great man and in common with all the fortunate few who studied at Pyle's purpose built studios he was guaranteed work by the time he had completed his studies as introductions and subsequent commissions to the art editors of mass circulation and illustration hungry magazines such as McCall's, Scribner's and Colliers were all part of the training that the young artists received. 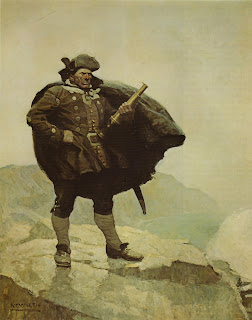 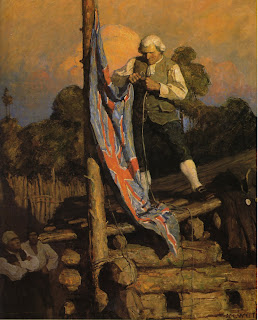 visual stimuli, there was no television, cinema was in it's infancy and not much beyond the novelty stage and the theatre and music hall were for many at best just an occasional treat, there was therefore an unsatiated demand for stirring adventure and serializations of classic texts 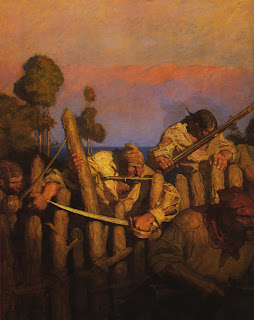 such as Robin Hood and Treasure Island with subsequent book editions featuring newly commissioned colour artwork by the new and rising stars of illustration were in great demand. 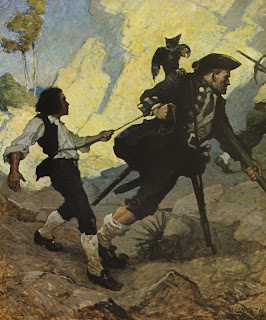 So here for your further delectation are some samples from that bygone era the first four being examples of Howard Pyle's artistry (including the superb "Dead Men Tell No Tales" - the captain and the mate have just bumped off the three sailors who have helped them hide the treasure. The mate is just checking the corpses for signs of life, but the captain still has one loaded pistol while both the mate's are empty - is he going to shortly be joining them?) and then a look at an early Howard Pyle illustration and it's subsequent 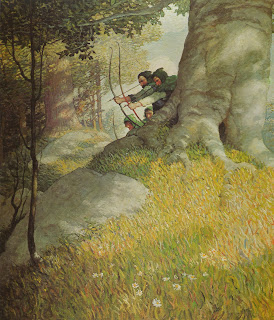 re-interpretation as an engraving (culled from the excellent Visions of Adventure published by Watson Guptill) and then the rest of the samples are by N.C. Wyeth from "Robin Hood', "The Black Arrow" and (of course) "Treasure Island". 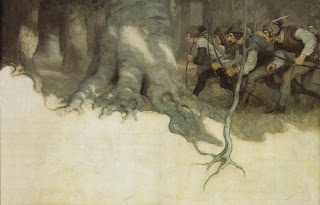 Posted by Peter Richardson at 10:48