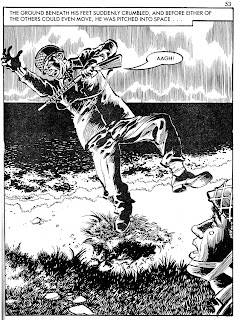 The final part of the equation that made Chick Checkley's particular brand of 64 page war comic so distinctive was his choice of artist, ironically the scripts which again tended to echo the idea of individual against the system, dysfunctionality being a given for many of the characters that inhabited the pages of the early Commandos, were provided by writers from both Thomson's and Fleetway, retired Major Eric Hebden being a case in point. 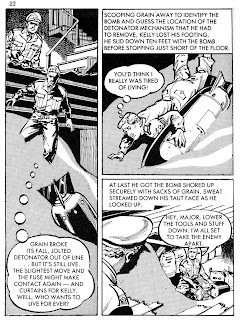 But as is always the case with comics, the catalyst that steered readers to engage with stories of men that the armed forces (let alone the enemy) found difficult to handle, was the artwork. Checkley had two conduits of artwork, with a whole slew of artists from Barry Coker's Bardon Art Agency (so called because of the sourcing of a lot of their talent from both offices in London and Barcelona) to help pitch in and meeet the omnipresent monthly print deadlines. 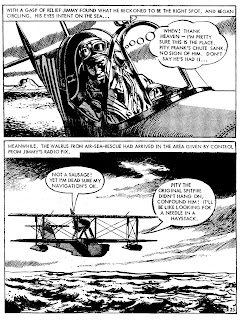 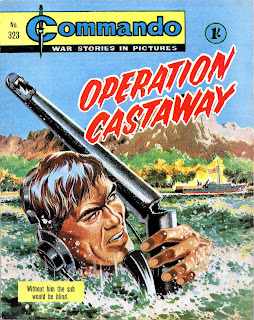 But the second conduit and by far Checkley's preferred route was via D.C. Thomson's own in house talent. And in the case of D.C. Thomson's we are talking literally in-house, as being patriarchal and money conscious Scots, they needed to know that their artists were at their desks and not at the golf course. The system worked well insofar as it provided an in-house training for a lot of the younger artists who would often be guided and mentored by their older colleagues, and there were plan chests just brimming with artwork which provided an added inspirational boost. 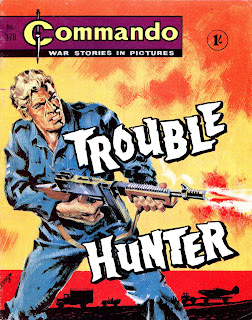 One of the younger artists that Checkley had under consideration was Gordon Checkley Livingstone, Livingstone's middle name bequeathed to him by Checkley's mother who was godmother to Gordon Livingstone. But it has to be said that all charge of rampant nepotism aside, Livingstone at that time wasn't a natural choice for a comic devoted to tales of military derring do. In fact much of his time had been occupied producing artwork for girl's comics and magazines such as Thomson's "Secrets". He had however done his National Service some ten years earlier in Germany and was no stranger to square bashing and handling, if not actually ever firing, a Lee Enfield rifle. 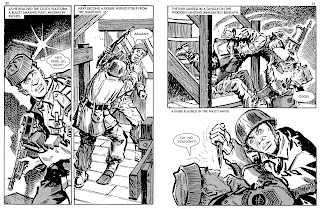 Livingstone set to his task with gusto, despite having absolutely zero awareness of pocket war libraries. It was this complete lack of knowledge about what had preceded Commando which enabled Livingstone to undertake the task free from any preconceptions about the genre. He was in effect working on a blank slate. 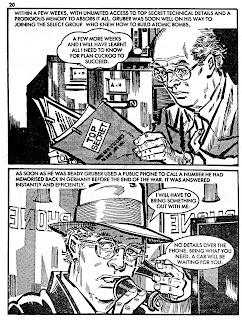 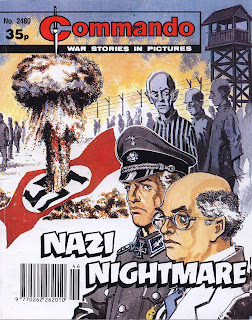 The first story that Livingstone delivered was "Mercy For None", which in many ways was definitely not what you'd expect a war comic to look like but in a kind of weird way it worked. In fact it worked to the extent that for the next thirty plus years until he retired in 1999, Gordon Livingstone was considered the face of Commando comics, with his work conveying a genuine charm in terms of the characterisation and storytelling that set his work apart from a genre where cliche can easily overwhelm individual artistry.

For up to date information on all things Commando please check the Commando website.
Posted by Peter Richardson at 10:10