The Wonderful World of Bootleg Records

Have you ever had one of those dreams where you find yourself in a shop surrounded by stuff that you've dreamed of acquiring but you know is impossible to source? You're walking down the aisles and all these myriad treasures that you've long fantasized and generally secretly obsessed about are there awaiting your perusal.

Never could such a dream be more applicable than to the world of rock music, and nowhere is there a better example of a band specifically designed to fulfill such a fantasy than The Rolling Stones. 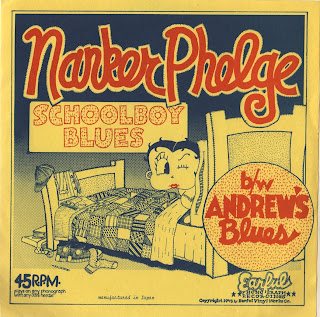 It doesn't take long for even relatively casual students of Stonesology to realize that there is a hefty chunk of their back catalogue that has never been released. The reasons are many and various, including all kinds of contractual grief, an acrimonious split with a manager whose estate still has a stranglehold on the rights to the cream of their back catalogue and a weird kind of hubris which attaches itself to the band and dictates that they really don't wish to have to compete with their younger and infinitely groovier incarnations as they still have the occasional album to release or the occasional tour to contemplate, Keith's arthritis and Ronnie's ongoing dalliances with the demon drink notwithstanding.

The fact that really amazing material is held under lock and key, while all that devoted fans can access through legitimate channels are pseudo rarites which in effect are nothing new just adds to the sense of frustration. 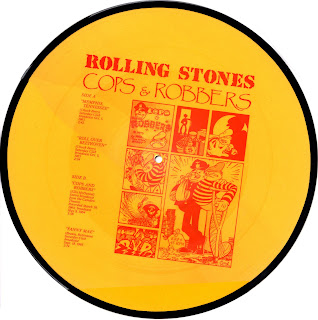 So the reasons why bands such as the Stones created such a long standing gap in the market are fairly plain to see but with all gaps in the market there are always entrepreneurs ready to satisfy these latent demands.

In the late sixties when there was still a genuine buzz of excitement around bands such as the Stones, there sprang up in America a generation of young guys that were not just into the music but were also enterprising enough to cater to the desires of collectors whose needs were not sufficiently sated by the corporate decision making (or lack of) of the sprawling and sluggish behemoth otherwise known as the music biz. 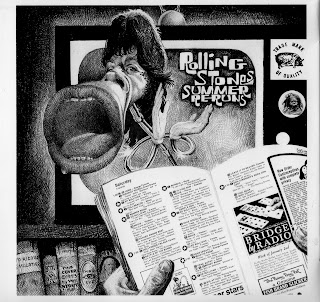 The fact that such activities were highly illegal, involving all kinds of calumny such as breach of copyright, theft of artist royalties and general disrespect for big business and the system in general just added to the heady aura of dubious legitimacy about such undertakings. The people 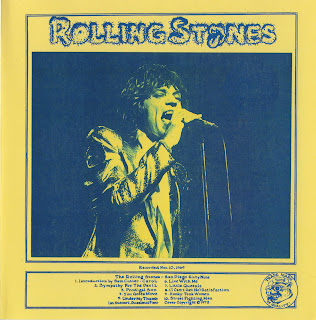 behind the release of these hitherto hidden gems were extremely resourceful, their relative youth notwithstanding. Take the case of the guy from England living on the West Coast who had been a key player in the music business throughout most of the sixties. He had in his possession early demos including the Stones legendary "Bright Light's Big City" demo which was infinitely better than their first Decca single, "Come On" (a Chuck Berry cover so lame that the band only ever performed it live on their first nationwide tour under extreme duress) but hitherto unheard although often discussed in hushed and reverential tones amongst collectors, who regarded such material as the ultimate Holy Grail of Stonesdom.

Two of the guys at the forefront of what was to become known as the Bootleg industry were determined to get a hold of this stuff but the Englishman was extremely cautious about releasing the recordings perhaps feeling the weight of potential legal suites and exile from the magic circle in the offing should such material get into circulation. Undeterred the young entrepreneurs asked him if they could at least listen to these wonders. He eventually agreed and with a pile of rarities tucked under his arm he arrived at their house. A pleasant afternoon was spent with the young guys plying him with herbal cigarettes and drink while they all happily listened to the amazing and hitherto unheard (except by the chosen few) recordings. 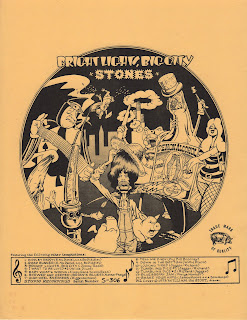 Unbeknownst to the guy with the London connections the exclusivity of the music that they were listening to had now been irretrievably compromised courtesy of an ever so discreet microphone and wiring from the back of the record player which had been artfully guided down through the floorboards to the basement below wherein dwelt another part of the team who was busily committing the whole session to a reel to reel tape recorder.

That was just the start, soon they were investing in state of the art microphones and recording live concerts, the albums being released scant weeks later on colored vinyl with edgier artwork than any record company would ever sanction to accompany them. It got to such a pitch that there was even one guy who wasn't actually part of the bootleg business but nevertheless became a reluctant and ultimately indignant feeder for their product who used to arrive at the Los Angeles Forum in a wheelchair which 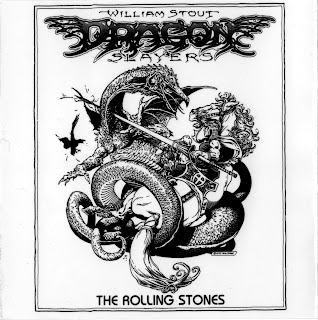 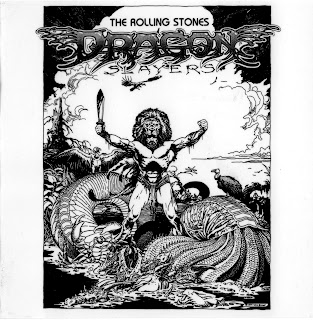 housed state of the art recording equipment. with microphones hidden in each arm of his wheelchair to capture the event in true stereo and as his needs were self evident he would always be wheeled down to the front of the auditorium to what was for his requirements, the best seat in the house. 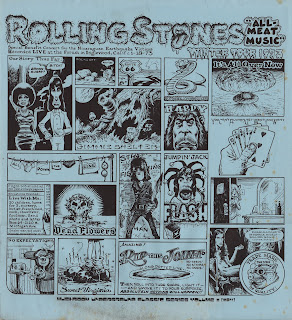 The artwork was produced under similarly clandestine conditions. William Stout whose artwork dominates most of this post, first commissions for the TMoQ (Trademark of Quality) label involved him receiving his brief at a pre-determined corner with a list of the songs and album title written on a scrap of paper which would be delivered to him by an outstretched hand emerging from the depths of the dark interior of an old nineteen forties limo. He would present himself at a different corner the following week to hand over the artwork and receive payment.

All in all a truly fascinating business. 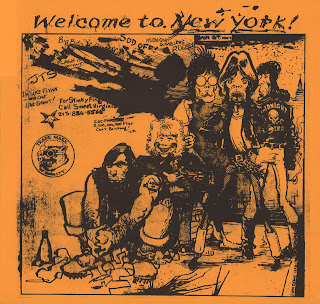 Posted by Peter Richardson at 09:19