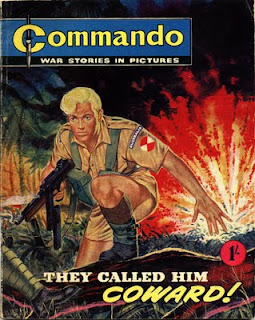 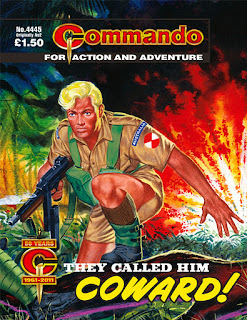 So here's the latest Commando quadruplets, including a superb reprinting of the second ever issue of Commando to appear back in 1961, when UK TV broadcasts were still in black and white and Cliff and the Shadows had released The Young Ones. Here's both the 1961 and 2011 editions for comparison. 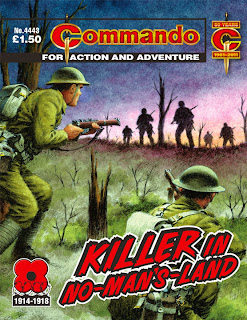 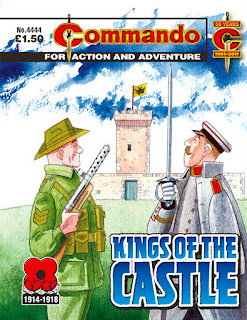 As a soldier in the no-man’s-land between your own trenches and the enemy’s in World War One, you expected to get shot at. British soldier Alan Roux and his mates certainly did.
What they didn’t expect was to have to dodge bullets fired from their own side.

Kings of the Castle

Many strange battles were fought during the 1914-18 war but surely the strangest involved a pair of French regimental policemen, a squad of Australian infantrymen, a bunch of escaped German POWs…and a mediaeval stone tower.

THEY CALLED HIM COWARD!

The powerful Japanese Army was island-hopping its ruthless way down through the South Seas towards Australia. Many a brave Aussie soldier, standing his ground in the green hell of the island jungles, was bulldozed into eternity by the sheer weight of the Nipponese army.
And one Englishman in the Australian army was caught up in the desperate battle.
Bob Palmer he was christened, but COWARD was the name they branded him with. Coward, the word that turns a man into the loneliest being on earth, for what soldier seeks a coward for company? 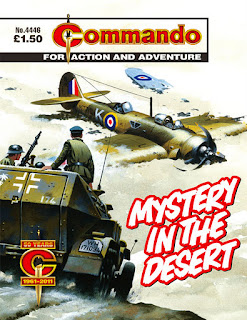 But there was no craven blood in Bob Palmer’s veins — and he proved he was ready to spill every drop as he blasted Jap after Jap into kingdom come.

A classic Commando tale this, a man the victim of a misunderstanding who has to prove his accuser wrong. And with plenty of action along the way to add some spice. That the two men are on the same side but different nationalities hardly matters nor that there’s a third character trying to be a peacemaker between them.
What does matter is the use of the emotive word Coward in the title and through out the story. It’s one of those loaded words that can’t be spoken except without venom — as amply demonstrated here by Sergeant Fettis.
Note to the 1961 Commando editor…the word Coward in the title is far too small, make it bigger.

MYSTERY IN THE DESERT

It was going to be Captain David Poole’s toughest mission yet. Posing as a German spy he was to feed the Nazis with false information which would lead their forces into a trap.
Everything was going like clockwork until David met up with a certain Australian pilot — and then everything started to go terribly wrong.

As I recall, Ken Gentry who penned this tale was a South African newspaperman with a sideline in Commando stories. I worked on a few of his over the years. Here he weaves a web of deceit with a double-crossing British agent, a straightforward Aussie pilot and a luckless German commander.
Cecil Rigby who provided the inside art for the story had also worked on newspapers, as a very good caricaturist and he wasn’t bad at Commando either, having been in at the start.
Ian Kennedy, who provided the cover, puts himself in the cockpit of every plane he draws. I hope he made an exception with this one — that looks like a painful crash.