I See a Bad Moon Arising...

Yes it's your old gloomeister with a truly apocryphal vision of what could happen if the people that rule the world (allegedly Goldman Sachs) continue in the manner that has brought entire continents to the brink of ruin and  Capitalism which is now floating on so much conflated debt finally collapses. This is an all too credible view of how things might unfold when the giant Ponzi scheme that international banking has become finally hits the buffers: 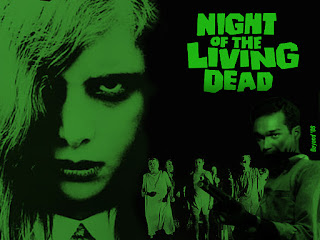 There are several thematic similarities to other shot on a budget, chillers, one in particular being Oscar Romero's Night of the Living Dead, where again there is a real feeling of claustrophobia, which rather than underlining to the viewer that the film makers did not have the sets nor the resources of Cecil B De Mille, actually adds to the feeling of unease.

In both cases we see comfortable Middle America, the land of the comfortable Middle Class beginning to feel less comfortable as it comprehends it's imminent demise. The redeeming factor for viewers of Romero's film is that it is in the final analysis a fantasy, whereas The Economic Collapse sadly is all too close for comfort. 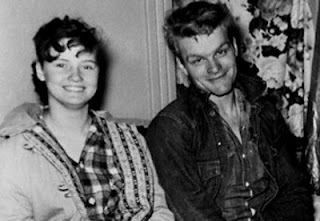 The USA in the immediate post war years was in a constant state of apprehension, which manifested itself in fear of Invaders from Outer Space (remember the proliferation of Flying Saucer sightings throughout the 1950's), The Red Menace (remember Senator Joseph McCarthy and the Senate Enquiry into UnAmerican Activities aka the McCarthy Witch Hunts?). To these you can add on Motorcycle Gangs, Horror Comics, Teenage Dope Fiends, Race Riots, Alcoholism, Kill Crazy Charlie Starkweather and his gal Caril Fugate terminating the lives of eleven people in Nebraska and good old wannabe taxidermist Ed Gein who was so starved of company in his lonely Winsconsin farmhouse that he dug up his recently deceased neighbors and brought them back to his home for company along with some fresher victims when conversation stalled as it inevitably does in such circumstances. 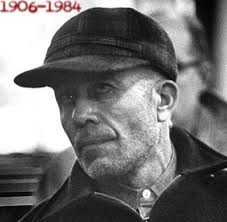 There was of course one horror which dwarfed even these frissons of unease in it's awful magnitude and whereas films such as Invasion of The Body Snatchers or the Mars Attacks series of bubblegum cards created visions of enslavement of the planet by alien forces, the real terror was founded on the cataclysmic final trump of Atomic Warfare.

To this there was no apparent remedy, protection or reassurance - it was going to get you and you had better prepare your soul, because there was absolutely no way of preparing your body unless you were naive enough to attempt the kind of precautions that were so mercilessly exposed in Peter Watkins film The War Game, originally planned for broadcast by the BBC in 1965 until the Powers that Beeb referred the whole thing to the British Home Secretary who then ordered it to be effectively put on ice. 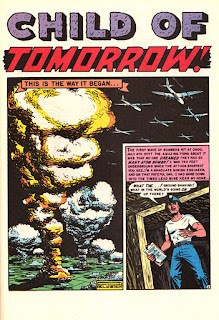 It was of course a theme which had been explored by those comic genius's Bill Gaines and Al Feldstein in stories such as Child of Tomorrow from EC's Weird Fantasy (No 17 although actually No 5 for all you comicologists). 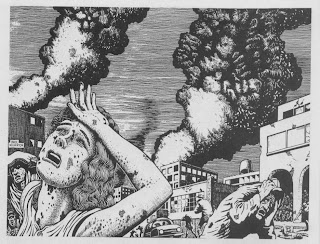 But powerful as Feldstein's treatment of a nuclear apocalypse is in what for 1951 was indeed very strong stuff, it is in the main a look at the post nuclear world of middle America. The real horror wouldn't manifest itself in terms of pulp based trash culture until a chance collaboration between graphic genius Basil Wolverton and the US evangelist and founder of The Plain Truth magazine Herbert Armstrong. As Monte Wolverton describes in the introduction to the recently published The Wolverton Bible his father's working day was such that a lot of his most productive hours in terms of his one off maniacal artistry was spent in the evening working to the accompaniment of the wireless. It was during these hours that he first started listening to the preachings of Armstrong who had secured himself a broadcast slot with one of the nations radios stations. They entered into correspondence and it wasn't long before a deeper relationship had been established. Wolverton found that many of the preacher''s thoughts and concerns addressed issues with which he had been wrestling for much of his teen and adult life. Armstrong aware of Wolverton's immense and unique talents wanted to draft him in to providing artwork for his religious tracts. Wolverton's workload and success, which peaked on the back of his creation of Lena The Hyena as a response to an Al Capp (creator of L'il Abner) sponsored contest to depict the world's ugliest woman, precluded him from being able to avail himself to creating much in the way of work for Armstrong. 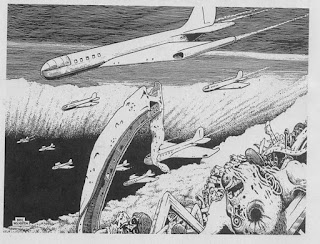 It was therefore several years before Wolverton could commit to producing work for Armstrong but when he did the work he produced was epic in quantity, scope and imagination. Amounting to nearly a thousand artworks, Wolverton's illustrations for The Bible were a tour de force, unlike and uninfluenced by any previous attempt to illustrate the Bible. 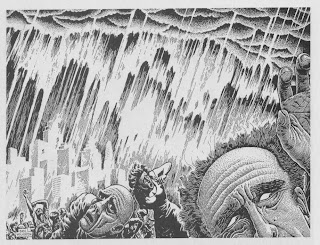 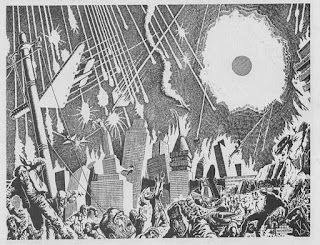 Great as the images were, the real shock and awe came with the last section when Wolverton unleashed his full power and intensity on the most chilling images yet seen in either an interpretation of the bible or an attempt to illustrate the effects of a nuclear conflagration on cities and people which to his middle American readership would have seemed too close to home to be viewed with the relative detachment such subject matter would normally be accorded.

More, as in 700 plus illustrations along with introductory texts by Grant Geissman and Monte Wolverton, can be seen in The Wolverton Bible published by Fantagraphics books - a very necessary and inspirational addition to your bookshelves.
Posted by Peter Richardson at 10:25