Heros the Spartan—On It's Way!

We have sensibly sat on our hands over the last few weeks before making any further announcements about the eagerly awaited Book Palace Books edition of 'Frank Bellamy's Heros the Spartan'. But I am pleased to be able to say that the problems our printer was experiencing with certain aspects of the production of the leather edition of this monster  book have now been resolved to everybody's satisfaction and barring typhoons, tsunamis, krakens or Somali pirates the container vessel with several palettes of 'Heros' will be arriving on  these shores early next month and is slated to arrive at Book Palace HQ on October 10th. 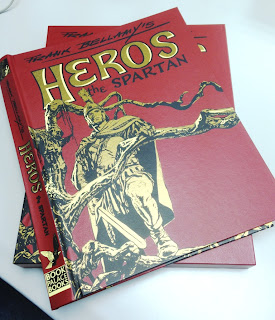 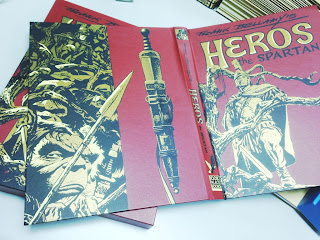 But while we are on the subject of 'Heros', I thought I would share with you some of the restorative work that went into preparing the scans we made of the original comics ready for publication.

Although the firm of Eric Bemrose who printed the Eagle and all of Bellamy's work on 'Heros' were rightly regarded as being the best in the business when it came to printing photo gravure comics and periodicals, they did slip up from time to time and aside from the ever present problem of out of register colour pages, some of their work towards the latter part of 'Heros' run did suffer a bit as can be seen in these examples, where in the spread that occurs near the start of 'The Axe of Arguth', you can see that the colours have over saturated (particularly the yellow) to the point where a lot of Bellamy's line work is getting obscured by the resultant murk. If you look at the close up head you can see this occurring. 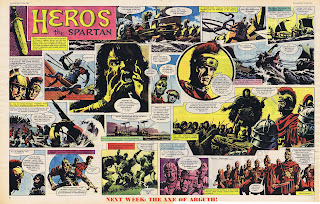 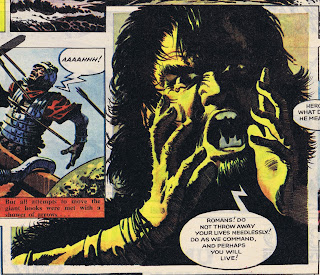 What we had to do was to haul back a bit on the colour and where detail had been lost, carefully select the black line and create a separate layer for the line so that the art could be successfully restored and Bellamy's work seen as he intended it. 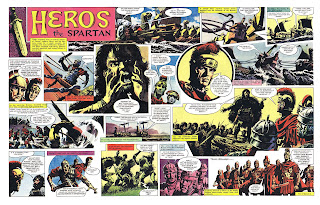 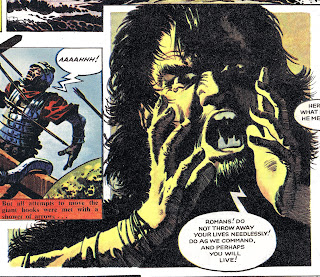 Similarly later in the same story there is a sequence where over printing of black has created a rich and dense black as the artist would have intended, but where there is no over printing the black appears greyed out. Again we had to carefully select the affected areas and reintroduce the missing elements to make the black as rich as intended, thereby removing the distracting patchiness which is particularly evident on the detail of Heros in extremis. 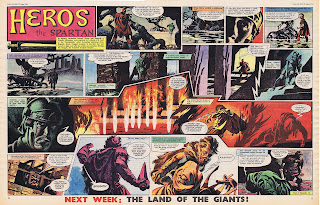 I won't bore you by showing you all the stages of the restoration involved in each of the spreads but this epic comic strip is, we believe, worthy of this attention to detail. 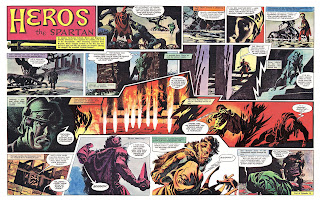 Sometimes the best endeavors are worth the extra wait.
Posted by Peter Richardson at 09:26